Blackening is a cooking technique commonly used in the preparation of fish and other protein foods such as steak or chicken cutlets. It is a fairly violent form of cooking that demands a firm fleshed fish like redfish, snapper, mahi, grouper or even salmon.

The meat is dipped in melted butter and dredged in a mixture of herbs and spices, usually some combination of thyme, oregano, chili pepper, peppercorns, salt, garlic powder and onion powder and then cooked in a very hot cast-iron skillet. 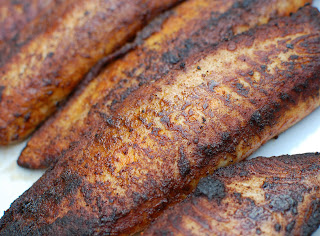 Mix all the ingredients together and store in an airtight container, in a cool, dark place until ready for use. Don’t use fresh herbs since they instantly burn and turn bitter.

Open all your windows and turn on the fans.  Blackening food creates a lot of smoke and sometimes some flames. Preheat your pan getting it as hot as possible as this will prevent sticking and promote the blackening. We highly suggest using a cast iron skillet to achieve the best results. They can stand the intense prolonged heat and provide excellent flavor for your chicken or fish, whereas other pans may warp.  If you don’t have a cast iron skillet and still want to blacken your meat, do not use a non-stick pan, instead use a thick-bottomed pan meant for higher heats. The original method is for single servings in a small cast iron skillet as would be done in a commercial kitchen. If you are feeding a crowd, you can use a large 12- inch skillet provided you have a big enough heat source like an outdoor cook-top used to deep fry a Thanksgiving turkey.

For blackening, you want to cut the meat into pieces you can easily handle with a large spatula; 4"x6" is a good size. Use filets that are around 1/2″ thick.  If they’re any thicker they may not cook all the way through without burning the outside to an inedible state. If the fish is thicker than 3/4", butterfly it or simply slice that piece laterally in half to make two thinner pieces. Keep the meat cold before blackening.  Butter and oils will stick better to a cool piece of fish or chicken.

Melt enough butter to coat all the meat you plan to cook on both sides, and then a few tablespoons extra to spare.  Pat your chicken or fish dry. This helps the butter create a sealing crust on the meat, keeping it from drying out. The blackening is caused by the butter charring in the pan, and the spices will add to the flavor.

Dredge the fish completely in melted butter, and then sprinkle your blackening spices mix moderately on the fish. The spice is not the key part of the cooking method. Do not put the fish down while sprinkling or at any time between the butter dredging and hitting the pan because you’ll remove the butter from the meat.

Cajun spices are the most popular for blackening, but you can use the spice mix of your choosing. This is our recipe for Cajun Seasoning Spices. Apply this rub on the fish when blackening or in your crawfish étouffée!

Mix spices together and store in an airtight container placed in a cool, dark place until ready to use. It is best not to use fresh herbs as they instantly burn and turn bitter.