The tradition of making treats with the pungent spice, ginger, dates back through many centuries and across several continents. Ginger was a plant native to China and India where much of the world’s supply is still grown. The ancient Romans used ginger as a remedy for the plague. During the thirteenth century, the English made medicinal ginger candies called ”gingerbrati.” During the following century, gingerbrati changed to gingerbread as breadcrumbs were added to the candy mixture. It was the fourteenth century Germans who really began to take gingerbread seriously. They formed guilds of gingerbread artisans, distinct from existing baking guilds. Although Queen Elizabeth is credited with first presenting gingerbread likenesses to her guests, the notion of edible figures is considered to have originated as substitutes for live sacrifices. Throughout the nineteenth century, finely crafted ginger-bread was used to express greetings, recognition, affection and celebration. The heart-shaped gingerbread Valentine was especially popular. In English villages, maidens would eat a gingerbread “husband” on Halloween to ensure that they would find a real mate. In the United States gingerbread has been popular since colonial days. George Washington’s mother was famous for her spicy gingerbread. Ginger was also included in the rations of Revolutionary soldiers, both for its medicinal value and to add flavor to their bland meals. Several children’s books have been written which carry out the gingerbread theme: The Gingerbread Boy, and the Brothers’ Grimm Hansel & Gretel are good examples. A tradition as long-standing as the baking of gingerbread yields great rewards: filling your home with a wonderful aroma; satisfying appetites; and, passing time with utter delight. 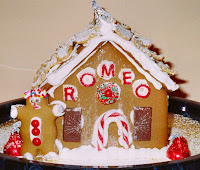 Preheat oven to 375o. Beat sugar, shortening and butter together until creamy. Add egg, molasses, and lemon juice; beat well. Combine dry ingredients and gradually add to butter mixture; beat well. Divide into to portions, wrap in plastic and chill three hours. Roll out dough to 1/8 inch thickness. Place pattern for house and cut with a sharp knife or use cookie cutters. Place on greased cookie sheet and bake for 10 to 12 minutes. Assemble house or decorate cookies with Royal icing.