Many people do not know that the term Mardi Gras actually means “Fat Tuesday.” Fat Tuesday is the last day of the Carnival season which begins on Twelfth Night (January 6th is the twelfth night after Christmas) and ends the day before Ash Wednesday. This is the last opportunity to celebrate before the beginning of Lent. The pre-Lenten carnival has Roman Catholic origins and is celebrated in New Orleans, as well as Brazil, France, and Germany. A tradition of the Mardi Gras season is the King cake. The cake has hidden within its sweet brioche, a token, usually a coin or bean. When the cake is cut the recipient of the token is the King (or Queen), and can expect good fortune in the coming year. The recipient is also responsible for providing next year’s King cake. King Cakes have a reputation of being hard to make, but I think this recipe will put an end to that myth. 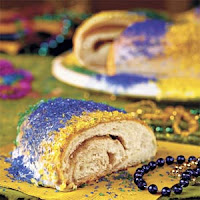 In a small bowl, dissolve yeast in warm milk and allow to proof (bubble). In a large bowl, cream together 1/4 cup butter and sugar. Add the eggs one at a time, stirring between additions. Next add the yeast mixture, and mix. Gradually blend in the flour one cup at a time. Mix together until a soft dough is formed. Cover the dough with plastic wrap or a damp towel and let rise in a warm location until it doubles in size, about 2 hours.

Gently deflate dough and transfer to a floured surface. Roll out dough into a large rectangle. Grease token and push into the dough, then rub 1/4 cup soften butter over the rectangle. Spread preserves over the buttered rectangle. Starting from one long side, roll the rectangular dough into the shape of a tube. Pinch the seam and gently place the roll on a greased cookie sheet to form a ring, pinching the ends to seal. Cover ring again with plastic wrap or a damp towel and let rise for 30 minutes to an hour. Place in a pre-heated 375o oven and cook for about 20 minutes or until top is golden brown. Cool and decorate with purple, green and yellow frosting.