We are an adventurous bunch. As parents, we want our boys to experience all the amazing things the world has to offer regardless of how quirky or strange they may seem. We like to travel to new locales and try new gastronomies. When cooking, my husband and I are exhilarated when we can update a traditional recipe with local produce or new ingredients. We have always tried to use the best and freshest ingredients available and we enjoy experimenting with new elements. My husband’s background is Italian and as a result, we tend to cook Italian food more than any other cuisine, but we are not afraid to dabble in the fares of other cultures! 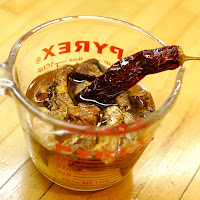 So, after much deliberation (and some thumb wrestling,) we decided to go with a tried and true recipe with some added twists. A family favorite has always been Coda Alla Vaccinara which is Roman Oxtail Stew. Four of the secret ingredients (Dried Aji Panca Peppers, Dried Wild Porcini Mushrooms, Tellicherry Peppercorns, and Smoked Sea Salt) included in the Goodie Box from Marx Foods seemed most likely to enhance the traditional preparation. So without further ado, here is the recipe we designed for our signature dish in the Iron Foodie Challenge:

We removed oxtails from package and rinsed them in cold water, then patted the pieces dry. They were coated with the freshly ground Tellicherry peppercorns and the smoked sea salt. We put olive oil, prosciutto fat, and oxtails in a heavy casserole dish and sautéed them until they were lightly browned. Once browned on all sides, we removed the meat to a plate, and added chopped onion, carrot and celery to the pan and sautéed over medium-high heat, stirring frequently for about 5 minutes until the vegetables were soft. We added wine and scraped the browned bits stuck to bottom of casserole with a wooden spoon, cooking for about 6 minutes until the liquid had reduced by about a quarter. We placed the meat back into the dish, and added tomatoes, hydrated porcini mushrooms and Aji Panca chilies. The casserole dish was then placed into an oven preheated to 300 degrees F. We allowed it to cook for a total of 2 ½ to 3 hours. We gently stirred the broth around the oxtails about halfway through the cooking time, and added the blanched celery pieces,covering again, and continuing to simmer for the remaining time. 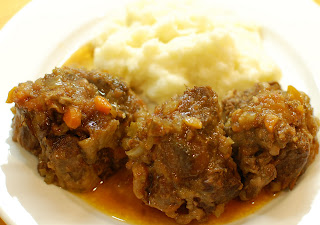 The end result was an incredibly rich and immensely flavorful one-of-kind dish. The mushrooms, chilies, smoked sea salt and fresh ground pepper added spicy and smokey nuances to an already hearty and savory recipe. We served the oxtails with mashed potatoes and all plates were emptied in record time! This recipe will definitely become a staple of our winter-time repertoire.

And, what’s a good dinner without dessert? Using four of the secret ingredients, (bourbon vanilla bean, fennel pollen, Tellicherry peppercorns, and maple sugar) we whipped up some crème brulee. The fennel pollen and pepper added a wonderfully spicy, anisey flavor while the maple sugar created a lovely crackly caramel top. Our oldest son enjoyed helping out by using the culinary blowtorch, while the younger wielded the camera again making the Iron Foodie challenge an event for the whole family.

After preheating the oven to 325 degrees F, we sliced the vanilla bean open (which immediately filled the whole kitchen with the smell of vanilla) and scraped the pulp from the center. We poured the cream into a medium saucepan and added the vanilla bean (and its pulp,) fennel pollen and ground pepper and set it over a medium-high heat and brought the mixture to a boil. The mixture was removed from the heat and allowed to sit for 15 minutes with a cover. We then removed the vanilla bean and strained the flavored cream through cheese cloth (or you could use a fine mesh sieve) to remove the spice remnants.

In a separate bowl, we whisked together the sugar and the egg yolks until it just started to lighten in color. I poured the cream into the eggs slowly while Dom stirred the mixture continually. After the cream and eggs were fully combined, the mixture was poured into ramekins which were set in a large baking dish. I placed the baking dish on the oven rack and then poured enough hot water into the baking dish to come halfway up the sides of the ramekins. The crème brulees were baked for 45 minutes until the custard was just set, but still quivering in the center. We removed them from the roasting pan to cool for a bit before putting them in the refrigerator. 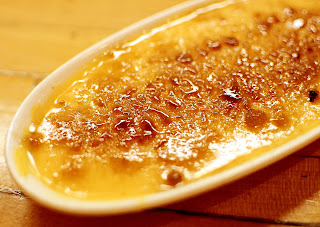 After about 2 hours, we took the desserts out of the fridge for about 20 minutes before sprinkling the maple sugar over the tops and using a culinary torch to “melt” the sugar and form a crispy caramel crust. I had planned to garnish the crème brulees with mint sprigs and berries, but they didn’t last long enough to be served with flair!

*Many thanks to our dependable sous chef, Dominic and to our ever-patient photographer, Sonny!