We cook with a lot of peppers which is no secret to our regular readers. There are more than thirty different known species of chili pepper with an even wider variety of peppers worldwide. All varieties of peppers are differing species of the genus Capsicum and are members of the plant family Solanaceae along with eggplants and tomatoes. The range of shades, flavors, shapes & sizes, and heat levels makes them wonderfully versatile for adding diverse flavors and colors to almost any dish.

Padrón peppers or pimientos de Padrón have received a good deal of attention lately. These delicious little green morsels are the most famous produce of Padrón, a town in the Galician Province of Spain. The first of these pepper seeds were transported from Mexico in the 16th century. Today, approximately 16 ½ tons are grown in Padrón each year.

The most-often-sweet, occasionally-hot-&-spicy peppers are usually served fried in olive oil and sprinkled with coarse kosher or sea salt. The level of heat varies according to the amount capsaicin of each pepper. Measured on the Scoville heat index, most Padrón peppers rate about 500-1,000 heat units although the odd one will stun you with up to 25,000 heat units! Eating these little devils is rather like playing “Spanish Roulette” because one in five peppers may be exceptionally hot.

While several growers are now selling Padrón pepper seeds for use in the U.S., finding fresh peppers at food shops or farmer’s markets is no easy feat. So, imagine my excitement when I met a man at Kroger looking for Tetilla cheese (also from Galacia, Spain) to use in stuffing his Padrón peppers! After a charming conversation, we agreed to a trade: some fresh Padrón peppers for a jar of “Denise’s peppers.”

He recommended following the method used by Spanish chef, José Andrés (shown in this video from his PBS show "Made in Spain.") Since we had no luck in finding the Tetilla cheese, we opted for Mahon, another Spanish cheese which is made from cow's milk and originated on the island of Minorca. 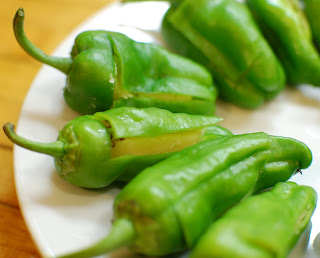 Pick through the peppers removing any that have wrinkled skins or dark greenish-black blemishes. Carefully wash and dry Padrón peppers, trimming stems that are longer than 1 inch. Using a sharp paring knife, “open a window” in each pepper and stuff each with a rectangle of cheese. Don’t worry about removing the seeds, they add to the flavor experience.

Once the peppers are stuffed, heat a skillet or heavy pan over high heat and add olive oil. Heat oil to its smoking point, and then gently slide stuffed peppers into the hot oil. Cook over high heat until all sides are nicely charred and brown.

Drain briefly on a paper towel and place on serving plate. Sprinkle generously with salt.

Like all fried foods, these Padrón peppers are best eaten hot, especially with a chilly glass of Txakoli or Verdejo - ¡Salud!

*If you cannot find Tetilla or Mahon cheeses, a mild white cheese such as Manchego or Monterey Jack makes for a reasonable substitute.