This very potent variant of eggnog which is served hot with brandy and rum was a popular drink in the U.S. and England from the mid-1800s until the Eisenhower administration. “Thomas and Jeremiah” was a jokingly-highfalutin’ name for the frothy hot drink once every bit of piece of American Christmas iconography as mistletoe and roasted chestnuts. In the 1880s, the New York Sun reported that the most fashionable barrooms would place a huge ornamental and costly punchbowl midway on the bar at Christmas time. 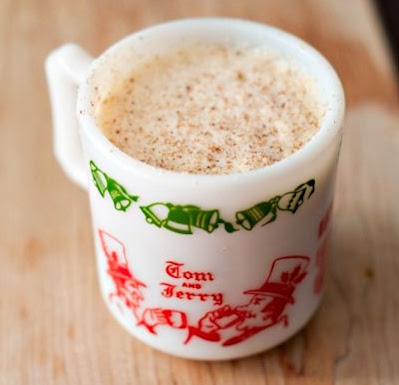 However, the stylish martinis and “wallbangers” of the swinging ’60s instigated the demise of the Tom and Jerry craze. We first encountered this heady libation at a neighbor’s home several years B.K. (before kids.) We were very excited to find the recipe in our first cookbook “The Joy of Cooking” copyrighted in 1975 (which has been adapted below.) We’ve been told that later versions of the cookbook do not include this recipe.

Contrary to popular belief, the drink’s name is not related to the popular MGM cartoon nor was it the brainchild of famous bartender "Professor" Jerry Thomas who authored one of the first bartender's guides “How to Mix Drinks” in 1862 either. Instead, it is a reference to Pierce Egan's book, “Life in London” and the subsequent stage play “Life in London” (“Tom and Jerry”) circa 1821. To publicize the book and the play, Egan introduced a variation of eggnog by adding ½ fluid ounce of brandy and rum calling it a "Tom and Jerry." The additional fortification helped popularize the drink.

The drink also features prominently in Damon Runyon's 1932 short story "Dancing Dan's Christmas" beginning with the passage: “This hot Tom and Jerry is an old-time drink that is once used by one and all in this country to celebrate Christmas with, and in fact, it is once so popular that many people think Christmas is invented only to furnish an excuse for hot Tom and Jerry, although of course, this is by no means true.” Runyon’s story, which inspired the Broadway musical “Guys & Dolls,” introduces the drink and a group of New York street characters who, after having a few “cracks” of Hot Tom and Jerry, embark on a goofy adventure to spread holiday cheer while tarnishing the image of Santa Claus in the process. 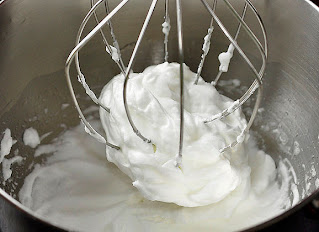 Wash the eggs in their shells with mild dish soap before cracking* and separate the egg whites from the yolks. In a large bowl, beat the egg whites with cream of tartar until they are stiff but not dry. In another bowl, beat the egg yolks with sugar, allspice, sugar, cinnamon, and cloves. Gently fold the yolk into the egg whites trying not to deflate the whites. This is the batter that can be stored in the refrigerator for up to a week or it can be frozen.

Dollop batter into a mug and add brandy and rum. Top off the mug with the hot water, milk, or coffee and gently stir to mix thoroughly, and dust each mug with freshly grated nutmeg. To quote Dancing Dan, “you will never taste anything so soothing in your life.”


*The original recipe in “The Joy,” the eggs are used raw. To avoid the threat of salmonella, use the freshest eggs possible and wash the shells before using. You can use pasteurized eggs or you can prepare the batter over a double-boiler if you wish to be extremely cautious.