Welsh cakes (pice ar y maen in Welsh) are traditionally cooked on a bakestone (a 'maen' in Welsh) which is a cast iron griddle about ½-inch thick. These scone-like cakes resemble crumpets and are about 2 inches in diameter and about half an inch thick. Welsh cakes are usually dusted with sugar, and served hot or cold. They are a common treat eaten on St. David's Day which is celebrated annually on March 1st with many Welsh people wearing a daffodil or a leek (or both) on their lapels.*

St. David is the patron saint of Wales, but little is actually known about his life. He was a Celtic monk thought to have been a tall, gentleman who was unusually strong despite his frugal diet. He was believed to be the descendant of a Ceredigion Prince and of the legendary King Arthur. St. David traveled widely throughout Wales, Ireland, England, and France and he founded several churches and a monastery in Wales and eventually became an archbishop.

This recipe calls for soaking dried fruit in hot black tea similar to recipes for the emblematic Welsh fruitcake, Bara Brith. It adds a distinctive flavor that lends to the authenticity of these folkloric delights and screams “Dydd Gŵyl Dewi Sant!” 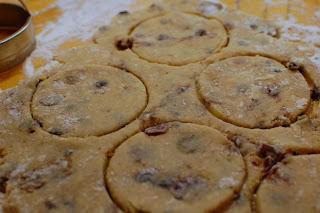 Mix together the dried fruit and cranberries in a large bowl, then pour the hot tea over. Cover with cling film and leave to soak overnight. Drain the fruit and discard the tea. 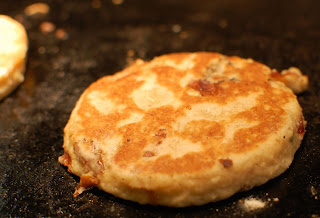 Cut butter into the flour to combine. It helps to cut the cold butter into smaller pieces first and then toss them separately into the flour making sure they each get covered in flour before you start “cutting.” There are several ways to cut the butter and flour together. I prefer to use a pastry blender made specifically for this purpose. My mom uses two butter knives moving them in opposite directions (kind of like a sharpening motion) actually cutting the butter. A fork works too, but care should be taken not to over “mash” the butter.

Add the sugar, spices, dried fruit, and then the egg. Mix to combine, and then form a ball of dough, using a splash of milk if needed. Roll out the pastry until it is ¼’ thick and cut into 3’ rounds with a biscuit cutter. If you don't have a biscuit cutter you can use an empty tin, vegetable, or tuna can. 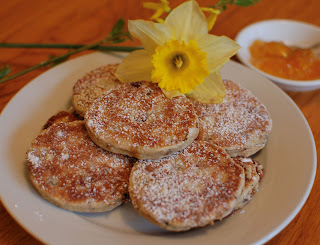 Rub the griddle with butter and wipe away the excess. Place the griddle over the burners and wait until it heats up, then place the Welsh cakes on the griddle. They need to cook for about 2-3 minutes on each side. Each side needs to be caramel brown before turning although some people I know like them almost burnt. Turn cake to brown the other side.

Remove the cakes from the griddle and dust with powdered sugar while still warm. Some people leave out the dried fruit, opting to split the cooled cakes and sandwich them together with jam.

*The daffodil is a national symbol that is in season during March and the leek is Saint David's personal symbol. Welsh troops were able to distinguish each other from opposing English troops dressed in similar fashion by wearing leeks. Interestingly, the association leeks and daffodils have similar names in Welsh: Cenhinen (leek) and Cenhinen Pedr (literally "Peter's leek" for daffodil).