It takes a lot to get me out of the house on a rainy Sunday morning, but a brunch at Red Sky Tapas was just the incentive I needed to brave the stormy weather. The restaurant has recently updated their brunch menu and I couldn’t wait to see what dishes they were offering. I started with a Bottomless Bloody Mary; yes, it was THAT kind of day! The adult beverage was expertly made with a tomato juice mix that was neither too thick nor too thin with a good spice, and not too much ice. The fact that it was “bottomless” might present a problem….

While the dinner menu consists of tapas, the brunch menu is a more traditional individual one-entrée-per-person style even though we did decide to share the dishes that were presented for us to sample. First, we were tempted with bacon that had been candy-coated in sugar which was crispy, sweet, salty and smoky all at the same time – Yum! 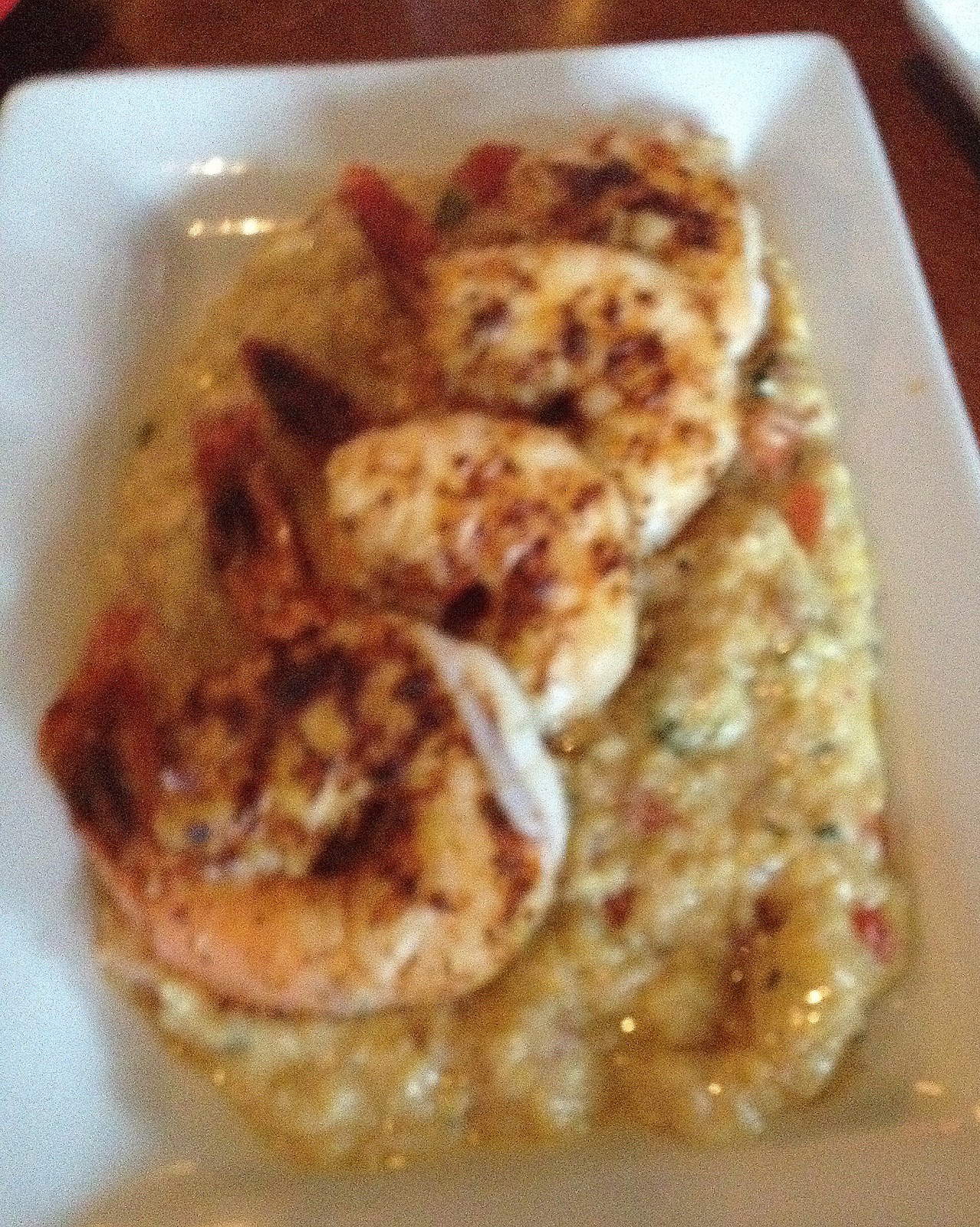 The second dish to come to the table was a Blackened Ahi Tuna Salad with tuna that was seared yet still rare, served over mixed greens tossed with a pineapple soy vinaigrette, then topped with pico de gallo and a poached egg. The sushi-grade tuna was perfectly prepared and the salad was a wonderful counterpart. Plates of Lobster Cake Eggs Benedict followed the tuna. I was skeptical about the lobster cakes expecting breadcrumb-laden patties with a hint of lobster meat, but was very pleasantly surprised to find the cakes loaded with lumps of lobster and light on the breading. These were topped with an apricot buerre blanc which lended a delicate sweetness to the dish. Next came their version of the Southern classic, Cajun Shrimp and Grits.  This was indeed an impressive dish: large tender shrimp dotted with tomatoes, roasted red peppers, jalapeños and cilantro atop creamy coarsely grounded grits with just the right amount of Cajun seasoning – Nirvana. 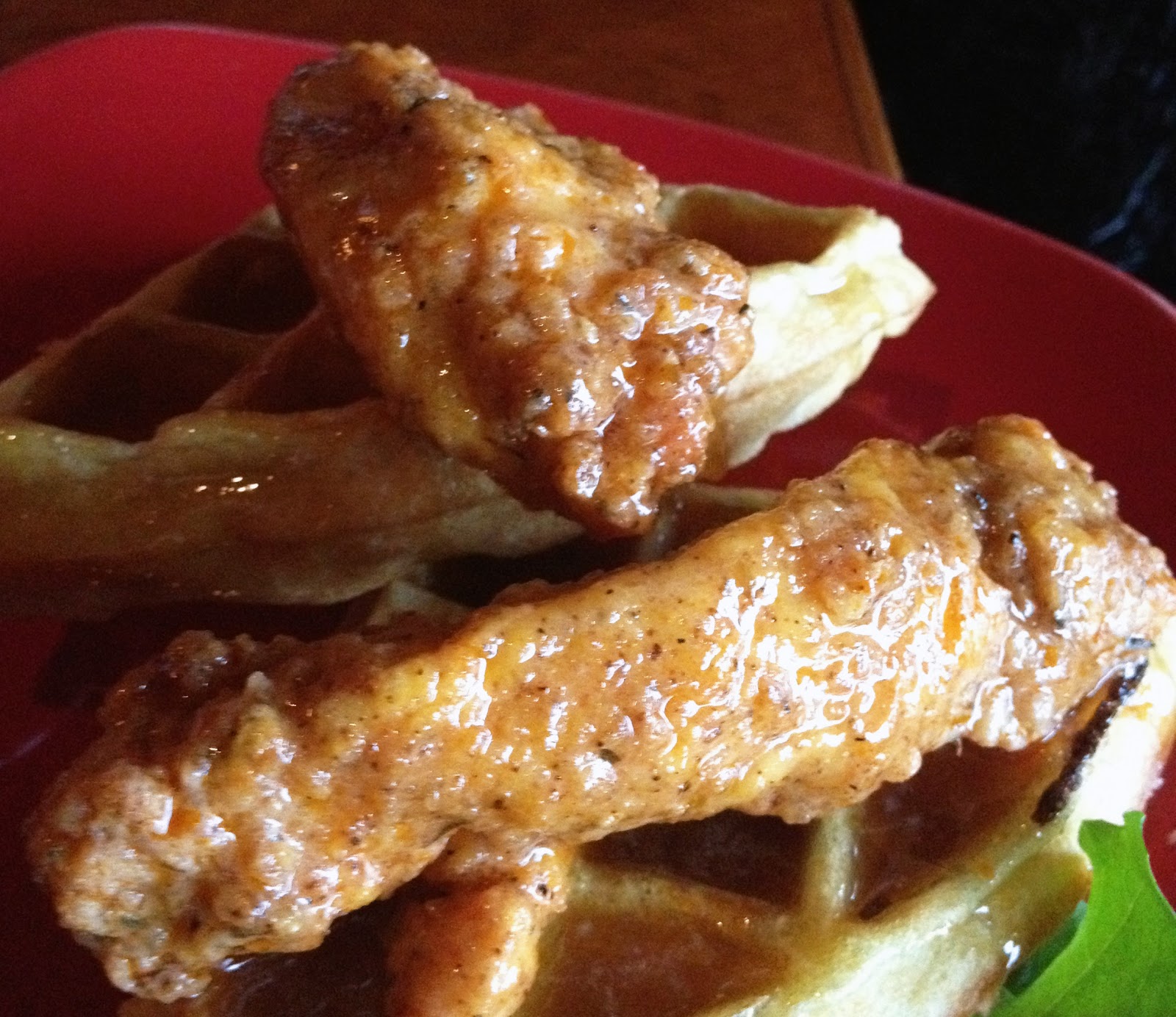 I was again skeptical when a plate of  “Buffalo Chicken and Waffles” arrived. A Belgian style waffle topped with fried chicken tenders tossed in a spicy honey glaze did not sound like my cup of tea. This dish certainly sparked the most commentary. This prompted Chef Brian Kennington to join the conversation as he described the thought process behind the dish. He explained that he worked diligently to concoct the definitive sauce for the chicken that would both complement and contrast with the sweet waffle.

The chef went on to explain his goal of introducing new and unexpected ingredients into traditional dishes. Two other examples of this are his Biscuits topped with Parmesan Gravy and his Jerk Chicken Tacos.  The Parmesan gravy is nothing short of genius and tied with the shrimp and grits as my favorite of the chef’s creations. The jerk chicken soft tacos with goat cheese and mango salsa were well composed and certainly an unpredicted flavor profile. Last, but certainly not least, were heaping bowls of Sweet Potato Hash with cubes of crispy roasted sweet potatoes with a generous spicy kick; another unexpected surprise!

Co-owner Terry Kirby came out to the table to share his thoughts on the menu and the restaurant’s focus on customer service. “We want our customers to feel at home here,” he said sweeping an arm in the direction of the open dining area and well-lighted bar. In addition to their tempting Sunday Brunch menu, Red Sky which is located in Marietta at 1255 Johnson Ferry Road, now offers an expanded lunch menu and plays host to “Dueling Pianos” each Friday and Saturday evening. When you go, don’t miss the shrimp and grits. Seriously.


While the food and beverage items we sampled were complimentary, I received no additional remuneration. The opinions included herein are honest and unsolicited.