Happily Eating at The Capital Grille

The Capital Grill is one of Atlanta’s most distinguished steakhouses so you can imagine how thrilled we were to receive an invitation from our friend Milla Williams of Happily Eating to experience the restaurant. As soon as you open the front door, you notice the mahogany paneling and art deco chandeliers which add to the warm, elegant atmosphere.

As we gathered and chatted, the friendly staff came around with glasses of the restaurant’s signature cocktail known as a “Stoli Doli” which is Stolichnaya vodka house-infused with “Dole” pineapples. We were then treated to our choice of other drinks from their exclusive cocktail menu. I selected a Bohemian made with Absolut Apeach vodka, a splash of berry liqueur, and topped with chilled champagne and a fresh raspberry.

Soon plates of pan-fried calamari with fiery peppers, large plump garlic shrimp cooked and served in a small cast iron pans, and exquisite mini tenderloin sandwiches with mushroom duxelles and Boursin cheese arrived at the table. As we all took pictures, Chef Matt Stone ambled around the table describing the ingredients and techniques for each dish. We shared the plates as the attentive staff took our dinner orders. Selecting an entrée proved more difficult than you might think. 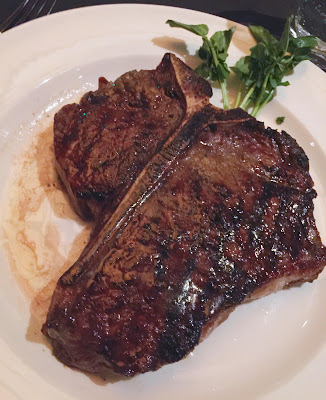 The Capital Grille, located at Perimeter Center West in Dunwoody, has a wide selection of steaks to choose from: ribeye, New York strip, filet mignon, and porterhouse. Long before their steaks ever touch the grill, they are meticulously dry aged for at least 18 days to achieve their incomparable flavor and texture. After which, each steak is hand-carved by in-house butchers to exacting standards. An intensive process to be sure. I opted for my favorite cut: a porterhouse which is the best of both worlds; a succulent filet mignon and a tender, meaty, bone-in strip steak.

My steak was a generous 24-ounces which I could have happily shared with a dinner partner! There were several menu options for non-steak-eaters such as the Chilean sea bass in mushroom soy broth, sashimi-grade, sesame-seared tuna and seared citrus-glazed salmon.

Our entrees were served with truffle fries with Parmesan that were crispy and not overly truffled; soy-glazed Brussels sprouts with large chunks of pork belly were nicely caramelized; and, fantastic lobster macaroni and cheese with huge pieces of lobster throughout. 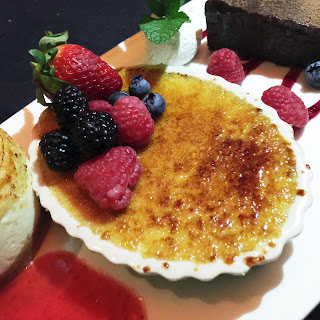 We were still licking our lips from the tender portions of beef as plates of dessert samplers arrived. We all gave a collective satiated sigh, but no one could resist the trio of treats set before them which included classic crème brûlée with seasonal berries, a decadent flourless chocolate espresso cake with cocoa powder and fresh raspberries, and their signature individual cheesecake with a brûléed top served with fresh berries. We were also treated to cups of cappuccino the size of cat’s heads. For a group claiming to be full from their delicious meal, those desserts disappeared faster than a buttered bullet.

We extend our sincere thanks to our gracious hostess Milla Williams for coordinating such a lovely evening and to the staff at The Capital Grille for their courteous and attentive hospitality who showed us the true meaning of Southern hospitality.

While the menu items we sampled were complimentary, the opinions included herein are honest and unsolicited.