The weather is getting colder and I headed to the market to buy some oxtails. Eating tails, feet, kidneys, tongues, or even fried blood is not as strange as it sounds. Italians are known for their love of organ meats, also known as offal (or awful to those who are not fans.) For the last two hundred years or so, Rome's offal cuisine has been known as Quinto Quarto, or fifth quarter. Roman butchers, called "vaccinari" (cow workers,) were very skilled and famous for their ability to refine any cut of meat. At first, the cows were split in half, and then in four quarters. What was left (inner organs, hooves, heads, tails, glands, brains, sweetbreads, even testi­cles) was called the fifth quarter; hence the "fifth," meaning useless or worthless, as in "the economy's fifth wheel." Coincidentally, the offal weighs about one-quarter of a slaughtered animal's total weight. 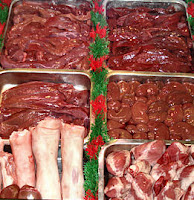 In the days before refrigeration, organ meats were difficult to keep. Because they were the first things to spoil, slaugh­terhouse workers received them to round up their meager pay. This gave rise to scores of recipes, mostly for beef parts. Over a fifty year period, the “inferior” cooking of the vaccinari became renowned citywide and evolved into dishes for connoisseurs. Once considered meat of poor quality, the offal are now considered delicacies that Italian restaurants and their patrons eagerly pay for.