Days of the Dead Bread

The Mexican Days of the Dead are held on November 1st and 2nd; a two-day celebration of death. In this ritual observance which is rooted in a bizarre blend of pre-Colombian and Roman Catholic practices, Mexican families make merry with the souls of their dearly departed. Because this celebration occurs immediately after Halloween, the Day of the Dead is sometimes thought to be a similar holiday, although the two actually have little in common. The living mingle with the dead at midnight picnics in cemeteries, they leave once- favorite foods as offerings such as sugar skulls and marigolds at homemade altars, and welcome back the dead for a day on earth feasting on tamales, spicy molès, and the most special treat of the celebration, Pan de Muerto, or “Bread of the Dead.” This bread dough is rolled out into strips shaped to resemble bones: 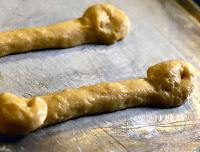 In a saucepan over medium flame, heat the butter, milk and water until very warm but not boiling. Meanwhile, measure out 1-1/2 cups flour and set the rest aside. In a large mixing bowl, combine the 1-1/2 cups flour, yeast, salt, anise seed and sugar. Beat in the warm liquid until well combined. Add the eggs and beat in another 1 cup of flour. Continue adding more flour until dough is soft but not sticky. Knead on lightly floured board for ten minutes until smooth and elastic.

Lightly grease a bowl and place dough in it, cover with plastic wrap and let rise in warm place until doubled in bulk, about 1-1/2 hours. Punch the dough down and shape into loaves resembling skulls, skeletons or round loaves with "bones" placed ornamentally around the top. Let these loaves rise for 1 hour. Bake in a preheated 350 F degree oven for 40 minutes. Remove from oven and paint on glaze.

Bring to a boil for 2 minutes, then apply to bread with a pastry brush. If desired, sprinkle on colored sugar while glaze is still damp.