A large basket of homegrown cayenne peppers sits on the counter waiting for me to put on my plastic gloves* and devote the morning to cutting and canning them. Before I visited Youngstown for the first time, I had never had peppers in oil. They were sitting on the table in Dom’s Aunt Phyll and Uncle Blackie’s kitchen with the salt and pepper. Blackie explained that he ate them with practically everything: sandwiches for lunch, steak at dinner, and his favorite, with eggs each morning. Blackie grew in the peppers in the garden, and Phyll would can them for use throughout the year. Dom remembered the peppers and lamented that he couldn’t find anything close to them in Atlanta. Phyll patiently explained to me how to make them. They do not last very long in our house as Dom and all the Youngstown transplants and especially my teenage boys, eat them almost as fast as I make them. 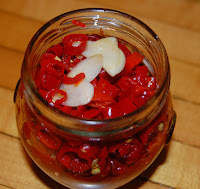 Pack the peppers and sliced garlic in your clean jars and fill them with olive oil. Using a spoon, gently push the peppers and garlic down in the jar to remove air bubbles. Top off with more olive oil if needed. Seal the jars and put them in a pot of hot water. Bring to a boil and simmer the peppers for 10 minutes to seal the jars. Let jars cool and check the seals of the lids. Place the jars in a cool dark place. While you can eat them right away, they are better if sit for a week or two, and will keep for up to a year. As I mentioned before, mine NEVER last that long.

*I'm not kidding about the importance of wearing the gloves!