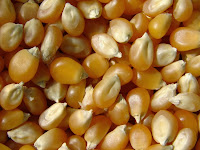 The guys usually spend Sunday afternoon in the "man cave" watching movies and wanting popcorn. While I like the convenience of the microwave version and the tidiness of an air-popper, nothing beats stove-top popped corn (especially when you look in the pantry and the microwave version has all been consumed!) So, I looked in the freezer and found an ancient bag of popcorn kernels. Then I scurried around until I finally found a recipe for popcorn (No, there were no instructions on the bag.) I finished making the popcorn only to discover I had no popcorn flavorings, so I grabbed the first interesting thing in my line of sight - Gibson’s steak salt. The guys ate 3 quarts of popcorn in one sitting. Just try to beat that with microwave popcorn!

Put the vegetable oil in a large, deep pan (6 quarts or so) and heat to medium, then add 3 kernels of corn, and cover. This may take a few minutes. Resist the urge to turn the heat up as the oil may start to burn. 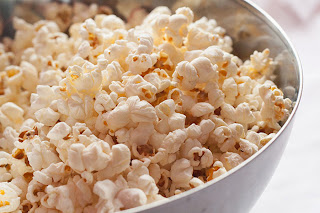 When the kernels pop, remove the lid and add the remaining corn. Cover and shake the pot, holding the lid on. Leave pot covered over medium heat until first kernel pops. Leave a small gap between the pot lid and opt to allow steam to escape. On average, a kernel will pop when it reaches a temperature of 347 degrees F. Do not be alarmed if it takes considerably longer than you thought (5 or so minutes.) When corn starts to pop, shake pot every few minutes to redistribute kernels over the heat.

When all the kernels have popped (no more popping sounds) remove pot from heat and let stand (covered) until popping stops, 1 minute, then uncover carefully. Open lid away from you to force steam in the opposite direction. Pour a little butter over popcorn and “fluff” to mix, then pour a little more butter and fluff. Keep pouring and fluffing until all butter is mixed. Add favorite seasonings, and fluff again. This recipe will make three quarts of popped corn. Toss hot popcorn with one of the flavorings below, or more oil or butter and salt, as desired. Makes 8 to 10 cups of real popped joy!