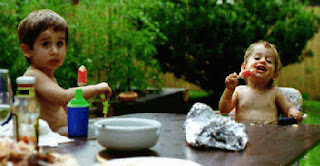 The crisp Fall air always puts us in the mood for some smokey barbecued spareribs (or "meatsicles" as the boys always called them.). Spareribs are pork ribs that have been cut from the bottom section of the ribs and breastbone of the pig, just above the belly. A full rack of ribs is known as a "slab" and usually weighs between 2-4 pounds.

The term "sparerib" may refer to the traditional German method of roasting ribs on a spit or a spear (spear ribs) or to the lack of meat on the rib bones. Either way, they are delicious when cooked slowly and lightly smoked. Because the heat of a grill is difficult to control and maintain, we have found that the optimal cooking method is to roast ribs in the oven and then smoke them toward the end of the cooking process. Dom applies a rib rub at least 30 minutes before cooking. 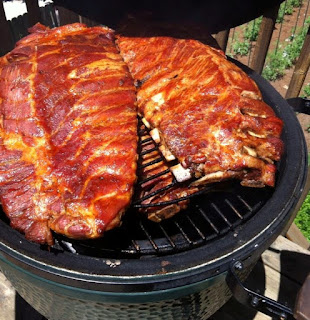 Mix all ingredients together with a fork. Sprinkle ribs with enough rub to cover and massage into meat. Don’t put too much rub on the ribs - just use enough to cover. Store leftover rub in a glass jar for future use.

Place ribs, meat side down, in baking dish(es). Cover the baking dishes with aluminum foil and place in an oven which has been preheated to 225oF.  A regular rack of ribs takes about after 4 hours to cook. Flip the ribs over (we use using two spatulas or grilling forks) at least once during roasting.

While the ribs are roasting in the oven, prepare a charcoal grill so that ribs can smoke when roasting period is over. Place briquettes to one side of grill, so that the ribs do not have to sit directly over the flame. Prepare a packet of wood chips by placing dampened wood chips (we prefer hickory) in aluminum foil and wrapping tightly then gently poke holes in the aluminum with a fork. Place wood chip packet on the coals. 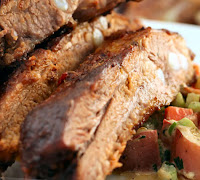 When ribs are done smoking, tightly wrap each slab individually in aluminum foil and place covered slabs in a paper bag. The ribs should be securely tucked back into the now-cooled oven to rest for approximately one hour before serving.

Put a layer of BBQ sauce on the ribs and serve them up with a side of potato salad and some baked beans.