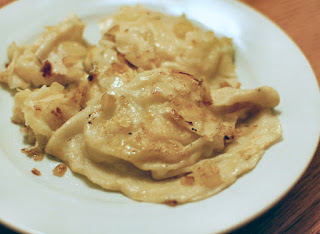 During the Lenten season, many Christians abstain from meat (mammal or fowl) on Ash Wednesday and all Fridays during Lent to honor Christ’s ultimate sacrifice. Pierogi (plural of pieróg) are a very popular dish during Lent especially in areas of the Midwest where Slavic immigrants originally settled. They are so popular in areas of Pennsylvania that between innings of Pittsburgh Pirates’ baseball games they hold “The Great Pierogi Race,” a promotion that features contestants racing in giant pierogi costumes named Cheese Chester, Jalapeño Hannah, Oliver Onion, and Sauerkraut Saul.

Though the origins of pierogi are difficult to trace, “dumplings” of varying types can be found in many Eurasian countries. Italy has ravioli, China has pot stickers, and Turkey has samosas; all are dough-filled dumplings. The first use of the word “pierogi” appears in Polish literature in the latter half of the 17th century. There are several traditional fillings for pierogi which include braised beef or lamb, sauerkraut and mushroom, potato and cheese, and prune. While the meat-filled are the most popular variety in Poland, potato and cheese filled pierogi (also known as Ruskie pierogi,) are the most popular in the U. S.Here are the instructions for making them from scratch, but you can wait until you have leftover mashed potatoes to make a batch! 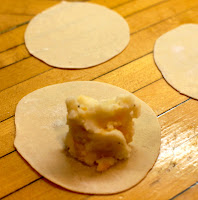 Beat egg, milk, water and salt in a mixing bowl, and add the flour, 1 cup at a time, until fully blended. Turn dough out onto a floured surface and knead until smooth and firm. The dough should not be too sticky. Allow dough to rest under the overturned mixing bowl for 20 minutes.

Using a rolling pin, roll dough as thinly as you would pasta dough use can even use a pasta machine if you wish. Cut the dough into circles using a biscuit cutter or an empty can.

Peel and cut potatoes into 3-4” cubes and place them into a saucepan. Add water until potatoes are covered. Bring to boil, reduce heat to medium and cook covered for 20 minutes or until a fork can easily be poked through their center.

Meanwhile heat a sauté pan on medium heat and add 2 tablespoons of butter to the pan. Once butter has melted add finely chopped onions and cook stirring occasionally for about 10 minutes until the onions are tender and begin to brown. Once browning begins, lower the heat and cook for an additional 2-5 minutes. As the sugar in the onions caramelizes, they will begin to brown more quickly. Transfer to a plate when they are golden brown.

Drain water from the potatoes and add the remaining butter and milk to the pot. Using a potato masher, mash potatoes to the desired texture, (more details here). Mix in salt, pepper and half of the caramelized onions and allow to cool before adding the grated cheese or filling pierogi.

Stretch the dough to the desired size and place a spoon of filling on one side of the circle. Fold the other side over the filling and pinch or crimp to seal. The pierogi will be a crescent (half circle shape) shape. If pierogi are not sealing well, paint the edges with water or beaten egg white. You can use a fork or your fingers to make a fancy edge if you choose. 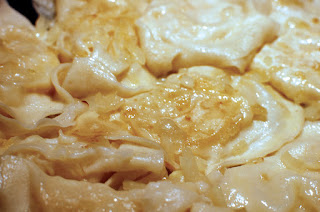 To cook pierogi, bring a large pot of salted water to a boil and gently place pierogi in the boiling water. Allow to cook for 8-10 minutes. Carefully drain the pierogi and place them in a sauté pan that has been heated with 1 tablespoon of olive oil and 1 tablespoon of butter. Add the remaining caramelized onions to the pan and stir gently, cooking until the pierogi are lightly browned. Serve with sour cream on the side for a cultural and delicious meatless meal!

Pierogi also freeze wonderfully well. I place them in a single layer on parchment or a silicone mat in the freezer. Once frozen, I then place them in a zip-lock bag and save for another meal. You can boil them right out of the freezer bag by adding 5 or so minutes to the boiling time.