Happy Pi Day – one of Dom’s favorite days of the year! Not only is he quite good with numbers, but he loves pie! Any kind of pie: apple, blueberry, pumpkin, but cherry is his absolute favorite. So when it came time to remake one of the winning entries from Round 2 of Marx Food's Ridiculously Delicious Challenge, we made the obvious choice given the deadline was March 14th.

We had toyed with the idea of remaking Azmina’s fish tacos with fried calamari, Tepin chili chimichurri and jicama slaw, but Dom’s woeful reply was “Oh sigh, I guess that means no pie” and I caved. (For the record, he really was quite pitiful!)

We decided to redo Shannon’s Blueberry Cherry Crisp with Grains of Paradise Ice Cream. In the spirit of PI Day, it seemed only appropriate to incorporate the World’s favorite pie plant; rhubarb.* Rhubarb is a perennial that grows from rhizomes which has stalks (similar to celery) with a strong tart taste.  While rhubarb is considered to be a vegetable, a New York court decided in 1947 that since it was used as a fruit, it was to be counted as a fruit for the purposes of regulations and taxes.

The tart dried cherries combined with rhubarb and dark sweet pitted cherries made a tantalizingly tangy filling. We used the coconut sugar which is naturally low on the Glycemic Index (GI), in the cobbler crust which gave it a lovely toasted brown color. With its citrusy nuance, finely grated Szechuan peppercorns (really dried berries of the prickly ash tree) dusted on the top added the perfect finish. 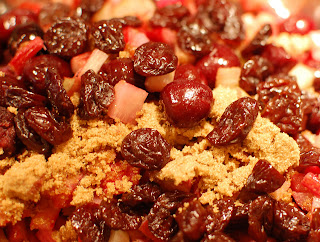 Preheat oven to 350 degrees Fahrenheit. If you are using fresh rhubarb, trim the ribs and chop them into 12” pieces. Blanch the ribs in a large pot of boiling water for 6-10 minutes (time depends on the thickness of the stalks.) and then shock the stalks in cold water to stop cooking.

Chop the rhubarb into ¼ inch pieces and place in a sauce pan with all the cherries. In a separate cup mix together schnapps and cornstarch until the cornstarch is completely dissolved, and add to the fruit and sugar in the pan. Bring the filling to a boil on medium heat to thicken. Spread the filling into an 11” x 7” baking dish, and dot with butter.

For the crust, cream together shortening and sugar, and then add the egg and milk and beat well. In a separate bowl, mix dry ingredients together. Slowly incorporate dry ingredients into the egg mixture until a smooth batter is formed. Pour (spoon) batter onto the filling. 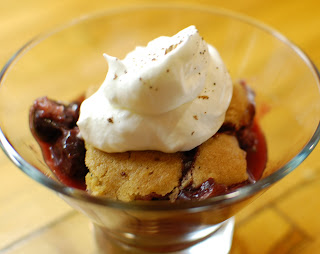 
*In the late nineteenth century, Laura Ingalls Wilder referred to rhubarb as "pie plant" in her novella The First Four Years.