Sweet Iced Tea: Taste the South in a Tall Glass

There has been a good deal of controversy over the last few weeks about the legitimacy of iced tea. This controversy has been caused by the Royal wedding of Prince William to Kate Middleton. True Anglophiles (those who admire British customs) believe the only way to consume tea is hot with a “spot” of milk. 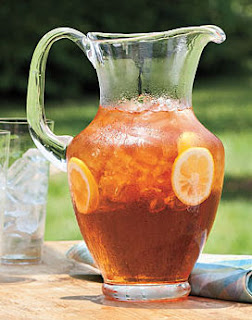 In the Southern U.S., we take our iced tea very seriously. Maybe it's the veracity with which it is made or perhaps it’s the water; either way Southerners swear by their traditional sweet iced tea and drink it by the gallons any time of year. Iced tea was popularized on a national level at the 1904 World’s Fair in St. Louis. The summer of 1904 was particularly hot so that people ignored hot drinks and went in search of cold ones. Iced tea was readily available and was an inexpensive alternative.

In 2003, Georgia State Representative, John Noel, introduced House Bill 819, proposing that all Georgia restaurants be required to serve sweet iced tea (the term 'sweet tea' meaning iced tea which had been sweetened with sugar at the time of brewing). While the bill was an attempt to bring humor to the General Assembly, the bill’s sponsor stated that he wouldn’t mind if it actually became law. To make traditional Southern “Sweet Tea,” follow these simple instructions:

3 Family size tea bags (Luzianne is a Southern favorite!)
4 cups of cold water
1 cup of sugar (or Xylitol)
a pinch baking soda (completely optional, but worth a try)

Bring 3-4 cups of water to a boil and add a pinch of baking soda to the water. This small amount of baking soda doesn’t change the taste, and even though it darkens the tea a bit, it removes any bitterness. Remove from heat and add 3 family sized tea bags. Allow to steep for about 10 minutes, and then remove tea bags, squeezing out the excess water from the bags. Put your sugar (or Xylitol) in a pitcher and then pour hot tea over the sugar and stir to dissolve. Cover your pitcher with a plate and allow to cool to room temperature.

To serve, fill your favorite tea tumbler with ice and pour sweetened tea or the ice. While it is delicious plain, you can add fresh mint leaves or a lemon slice to add a fresh zippy flavor. If there is any tea left, place the plate back on top of the pitcher and refrigerate. 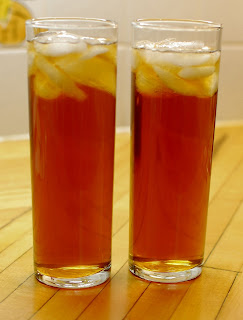 Given the nature of sweet tea and its solemnity, it did seem a natural candidate for a taste test involving sugar and a sugar substitute. I received a sample of “Xyla” from Emerald Forest. Xyla is Xylitol made from North American birch trees and is a safe, natural sweetener without the side effects of sugar or artificial sweeteners. It has the same sweetness as sugar and is used in place of sugar on a one-to-one ratio. It contains only 2.4 calories per gram and is slowly absorbed as a complex carbohydrate. Xylitol is good for your teeth, stabilizes insulin and hormone levels, and promotes good health.

We made iced tea using the recipe above pouring steeped tea over equal amounts of regular granulated sugar and Xyla and stirred to dissolve the sweeteners, then added ice. Both glasses looked identical before tasting began. Then each of us conducted a blind tasting of the two versions of sweet tea. When asked which tasted better, my oldest chose the tea with the regular sugar, my youngest chose the tea with the Xyla, and I had a difficult time telling any difference at all.

Then, out of curiosity, we each tasted a little bit of each on a spoon with surprising results. We all liked the taste of Xyla better than sugar. It is hard to describe the sensation, but the Xylitol has a “bright” taste – kind of minty without the mint. While it is a bit pricey, we will definitely be adding Xylitol to the grocery list for special recipes and for guests with health issues to consider.