Once regarded as strictly a Southern vegetal, vitamin-rich okra has increasingly gained national distinction for its unique flavor and texture. Sprightly green okra pods embody the taste of summer. When combined with spices and a light vinegar brine, these crunchy, quintessentially Southern pickles are part and parcel of a fine old culinary heritage. The perfectly balanced, sweet-sour flavors and characteristic textures complement everything from charcuterie and cheese to a well-dressed hot dog. Zippy okra pickles also make a fabulous addition to vodka martinis and Bloody Marys. The chili peppers give these okra pickles a pleasant kick. If you prefer spicier pickles, add another chili or two to each jar. 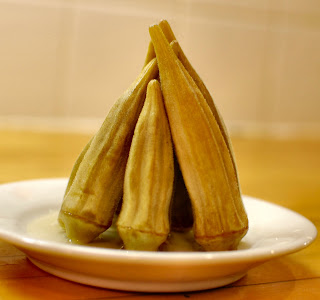 In a large pot over high heat, combine vinegar, water, kosher salt, and sugar and bring to a boil. Ladle the hot brine over the okra and then seal the jar. Allow jar to sit for a minimum of 1 week to marry the flavors before using. Refrigerate the pickles after opening (if there are any left!)

And, given the popularity of fried pickles (and because Sonny and I are bona fide pickled-okra-aholics,) we recently tried frying pickled okra. We can imagine that it would appeal to some, but neither of us really liked the result.