Outside of the Southern states, a lot of folks have never eaten grits; some have never even heard of them! Known as the "Southern oatmeal," grits were favored over oatmeal before air conditioning was invented because they could withstand the heat and humidity better. Three-quarters of the nation’s grits are still sold in the "Grits Belt;" the Southeastern coastal states stretching from the Carolinas to Louisiana.

Grits are coarsely ground (dried) corn that are traditionally cooked with butter and served as a side dish for breakfast or dinner. Their name comes from the Italian word "gruzzi" which means crushed corn. Grits are very similar to other thick maize-based porridges including the Italian polenta. Grits, however, tend to be made from white corn and are more coarsely ground than the yellow corn used in polenta. 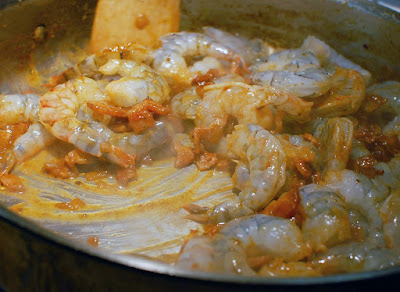 To a true Southerner nothing compares to warm, cheesy grits topped with succulent, sweet seafood, except maybe the addition of a magical, spicy bacon sauce.


Rinse shrimp in cold water and peel. Brine shrimp in salted water until ready to cook. 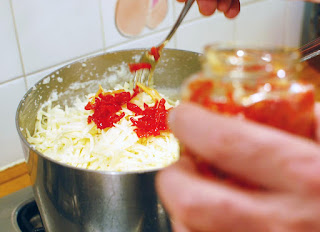 Cook bacon in a large skillet over medium heat until crispy, about 6-8 minutes. Transfer bacon to a paper towel to drain. Add chopped onions to the bacon grease in the pan. Depending on the amount of grease left from the bacon, add up to 1 tablespoon of olive oil as needed to coat the onions. Sauté onions until soft and translucent, about 5-7 minutes. The term “until translucent” is commonly used to describe onions sautéed in butter or oil.  Raw onions are fairly opaque, but as they cook they slowly become almost transparent. When this happens, add spices to the pan and stir to mix.

Next, add the beer, ketchup, and Worcestershire sauce, stirring to combine. Coarsely chop the cooled bacon and add to the pan. Cook until the pan juices are thickened and syrupy. 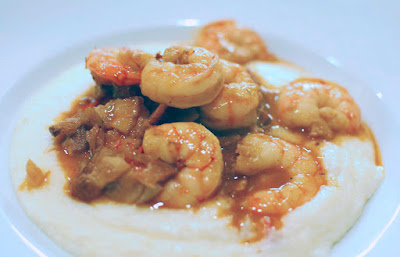 Drain shrimp and add to the pan, tossing gently to completely coat shrimp. Bring sauce back to a boil, then cover pan and remove from the heat letting the shrimp rest for about 3-5 minutes to allow shrimp to steam and fully cook.

Meanwhile, cook grits according to package directions, stir in cheese and peppers until fully melted and incorporated. Serve immediately on a platter with a mound of cheese grits with the shrimp (and the magical sauce) in the center.

And now the really magical part… watch as all the shrimp and grits disappear!