We have all heard the expression that “breakfast is the most important meal of the day.” According to the American Institute for Cancer Research it happens to be true. This morning, I was privileged to start my day with 11 Atlanta food bloggers at a Blogger breakfast hosted by Mary Moore and her amazing staff at The Cook’s Warehouse in Ansley Mall. We were treated to a delicious, healthy meal prepared by Chef Nancy Waldeck, food blogger, author of “Taste and Savor” and 3-year cancer survivor.

Introductions were made before Chef Nancy began her cooking demonstration. She started with a light version of shrimp and cheese grits made using chicken broth in lieu of cream. Chef recommends using colorful vegetables not only because they help dishes look more appetizing but because they contain more nutrients. Chef also shared several of her favorite cooking tips that I intend to use in the near future. For instance; after cooking bacon you should let it cool on a cooling rack rather than letting it sit in its own grease on a paper towel.

Chef sang the praises of stone-ground grits from Nora Mill in Helen, Georgia. One taste of the end result was proof that she was right. The grits were creamy with a terrific texture. The addition of grated Parmigiano Reggiano from the Murray’s Cheese Shop located in the Ansley Mall Kroger didn’t hurt either!

Next, Chef Nancy prepared a baked French toast which was as delectable as it was easy. The fact that it can be made the night before and popped in the oven the next morning makes this recipe even more appealing. 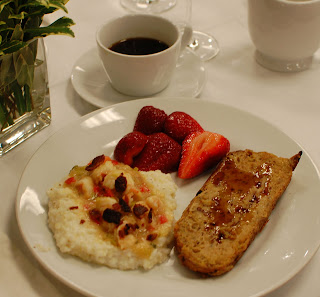 Preheat your oven to 425 degrees F. Spray a 9" X 12" baking pan or dish with non-stick butter spray and arrange the bread slices in a single layer. (The bread should fit into the pan, side by side, snugly.)

In a medium sized bowl, combine the eggs, milk, maple syrup, vanilla and ground cinnamon. Beat to blend and then pour mixture over the bread. Let soak until all the egg mixture is absorbed, turning the bread after about 10 minutes. Bake in your preheated oven for 15 minutes, then flip the bread and bake for about 10 more minutes or until golden brown. Serve with maple cinnamon syrup.

Combine the maple syrup and ground cinnamon in a heavy, small saucepan. Bring the syrup to a simmer. Remove from the heat, place the baked French toast on heated plates, top with the warm maple cinnamon syrup and serve.

After the wonderful meal, we had the opportunity to mingle with fellow bloggers, many of whose paths I had crossed in the ever-growing blogosphere. There is amazing talent in this group, and I was thrilled (and intimidated) to meet them. I am truly looking forward to pursuing their blogs and to working with them to promote great food in the Atlanta area (and beyond!) Special thanks to The Cook’s Warehouse for bringing us together to break our fasts!