We interrupt the normally scheduled blog post to bring you this important response to the growing anti-foodie movement. Mindy Kaling, the actress who plays Kelly Kapoor on NBC's The Office reopened a festering wound last Thursday when she tweeted “I’m over foodies.” The brouhaha reached its peak in February when The Atlantic's B.R. Myers posted the polarizing article "The Moral Crusade Against Foodies." Myers’ article was followed by another writer for The Atlantic,  James McWilliams who took up the cause in his article "Foodies vs. Darwin: How Meat Eaters Ignore Science." 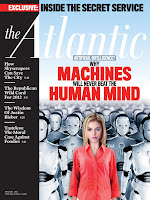 My initial reaction to the accusation that all foodies are elitist jerks and are morally corrupt if they eat meat, was one of indignation, but I was willing to let it go. While Myers’ excessive ranting about Anthony Bourdain and his dinner guests eating ortolan (endangered songbirds fattened up in pitch-dark cages) was annoying, I was willing to let it slide. But then Myers went and did it! Oh yes, he made me angry. The kind of irritation that rankles until you feel you must retort. On page 5 of his anti-foodie diatribe, Myers says “Of course, the bulk of foodie writing falls between the extremes of Pollan-esque sanctimony and Bourdainian oafishness,” and then goes on to lambast Texas food blogger, Robb Walsh for his award-winning description of his visit to Bentley’s Oyster Bar in London.

Dom's reaction to the hullabaloo was "Really, a crusade over semantics? Given the other significant problems of the world, someone has time to write FIVE pages about the morality of foodies with such comments as 'littleness of soul' - really? Perhaps he should consider trying a slice of bacon, he might feel better."

I believe that Mr. Myers (a) has confused followers of extreme cuisine with “foodies,” and (b) has confused “foodies” with food writers. On the first count I would like to point out that there are always humans on opposing ends of any spectrum (our entire political system in the U.S. should be proof-positive of this occurrence). Sports are another perfect example. There are people who are perfectly happy climbing rocky surfaces for exercise or sightseeing, and then there are those reckless folks who prefer to compete in “extreme rock climbing” where the danger-seeker climbs to the top of a tremendously high cliff with his or her hands and feet and a bit of rope attached to a harness that (they hope) has been properly anchored to the rock face.

Although according to CNN Eatocracy’s Jennifer Wolfe the term ”foodie” is out of vogue at the moment, generally speaking, foodies are people who enjoy good food and want to learn more about the foods they eat. Good ingredients seasoned properly, cooked correctly and served nicely for the sustenance and enjoyment of the diner. Conversely, extreme cuisine challenges the “athlete” to dine on the wildest, most bizarre ingredients, seasoned with the most exotic spices, cooked using the most obscure methods and served for the entertainment of the challengers. New found interest in “extreme cuisine” is evidenced by the onslaught of new television shows on the topic. In addition to the Travel Channel's Anthony Bourdain: No Reservations, the Food Network has teamed up with Jeff Corwin, animal and nature conservationist, to explore human culture through regional cuisine in the primetime series Extreme Cuisine with Jeff Corwin. The National Geographic series Taboo features episodes of which focus on Extreme Eats.

As for Myer’s second misconception all food writers are sanctimonious and are oafish; not all food writers are foodies (or vice versa) and seldom are they priggish or stupid. Actually most foodies that write, in my acquaintanceship, are pretty cool and groovy; they just want to hang out, drink a little bit, eat something tasty and then share the experience (and recipes) with their friends. They don’t feign piety or righteousness in their blog posts, are not hypocritically devout to the recipes they share, and do not seem high-minded in the stories they include in their posts.  Food critics (that write) and opinion columnists (that eat) on the other hand, are far more likely to be holier-than-thou and dim-witted, but that’s an entirely different issue, (and one I do not feel inclined to address until another contributor to The Atlantic irks me to the point of rebuke.)

In the meantime, here is an easy (even a food writer could make it), vegan recipe for grilled vegetables. For the record, in the event there is any confusion as to my interpretation of the word grilled, I mean vegetables that have been “tormented with heat” which is exactly how I hope that B. R. Myers (and his misguided followers) feels in the wake of his silly tirade. 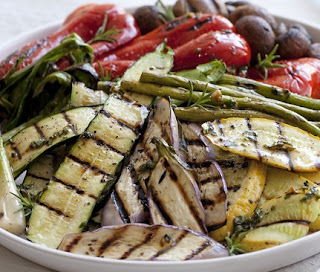 ANY fresh vegetable (we like fennel, zucchini, eggplant, tomatoes and even beets)
Olive Oil (NOT butter)
Salt and pepper

Prepare and light grill. Rinse vegetables and trim off ends and leaves. Cut larger veggies in to ½” slices or pieces (tomatoes in half) and brush with olive oil (we use cheap Home Depot disposable brushes) and sprinkle with salt and pepper. When the coals are ready, lay vegetables on the grill surface (tomatoes should go cut side down) and cook until they are soft and tender, turning occasionally. Depending on the temperature of your grill and the size of your vegetables this will take about 3-7 minutes per side.

When they are charred and brown to your liking, remove them from the grill and drizzle with additional olive oil and another sprinkling of salt and pepper. Savor the caramelized flavors with some crusty bread and a glass of crisp white wine, and then feel free to write about it and share with your foodie friends!