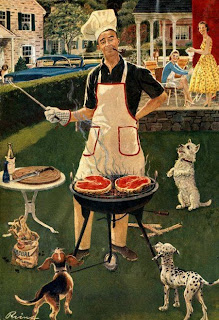 Thanks to the nagging of the greeting-card, flower and candy industries, Mother's Day has become etched in our collective consciousness as a holiday not to be forgotten; the guilt would be too excruciating. But Father's Day, which falls several weeks later, is often commemorated with only a card and perhaps a ubiquitous (and most likely hideous) tie (that he will never wear) to celebrate the occasion. Given all that our fathers have endured over the child-rearing years; endless gamesof catch, Christmas Eves spent sweating over the assembly a variety of gifts (with instructions in German), forced politeness toward dates with odd hairdos, and teaching us how to parallel park, Dad clearly deserves better.

So on his day, let's give him what he really wants: the chance to relax, have fun and, to top it all off, enjoy a great dinner. According to an informal poll conducted by Chef Nancy Waldeck, Dads want a big juicy steak that they cook themselves (to ensure that it is cooked to his exact taste.) So in honor of all Dads on Father’s Day, we are including grilling tips and advice for Dads everywhere to enjoy their meaty treasures:

Grilled steaks require glowing coals. No flame. Let the fire burn down till a gray-ash film covers the charcoal. If fire's too hot, you dry the meat, lose good juices. A well-made fire is the essential first step in outdoor cooking. The right fire makes barbecuing smooth and simple.

The temperature of the fire needed depends on the type of meat you are going to cook. For cuts of meat such as steaks, burgers, and kabobs which you intend to cook rapidly, use a relatively hot fire. A moderate fire is fine for roasts and larger pieces of meat. For slower cooking cuts of meat such as pork chops and spareribs, use a slow fire.

Pile the charcoal in a pyramid on the firebox of the grill. You don't need much charcoal. Beginner chefs are often too ambitious, build too big a fire. After you've built several barbecue fires, you'll be able to gauge the amount easily. Add liquid lighter to charcoal; wait a minute, then light. Do not use gasoline or kerosene. Let charcoal burn for 15 to 20 minutes until the briquets are about two-thirds covered with gray-ash. Spread the briquets evenly throughout the grill. The bed of coals should be shallow (easy to control) and just a little larger than the area of food you are cooking.

The fastest way to get a bed of cooking coals (about 15 minutes) is with an electric fire starter. Most other methods of fire starting take approximately 45 minutes. A chimney is another secret for fast take off. Make your own from a tall juice can or a 2-pound coffee can. Remove ends from can. Using tin snips, cut out triangles or circles around bottom, 1 inch apart, to allow draft. Or punch triangular holes with a church-key bottle opener and bend down for legs. (While the bottle opener is out, be sure to use it to open an icy cold beverage for Dad while he labors over the hot flames.)

Place a wad of newspaper in the base of the chimney, add 6 to 8 charcoal briquets, and then light the paper from the bottom of the chimney. When the briquets are burning, add more to the top. Allow to burn about 15 minutes, and then lift off chimney (with tongs!) and rake coals where you want them.

Don't start to cook until the fire dies down to glowing coals. Coals are ready for cooking when they look ash-gray by day, and have a red glow after dark. No flames! Don't start cooking too soon. When coals are hot, tap off the gray ash with fire tongs; ashes on the briquets insulate and retard the heat. 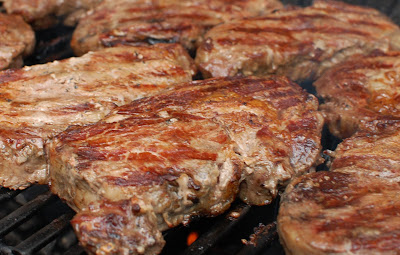 If you are cooking a large piece of meat that requires a long cooking time, plan to replenish the coals from time to time. Add a little extra charcoal around the edges after your fire is ready for cooking. Don't top your cooking fire with cold coals; this will lower the temperature more than you think. To increase heat, add warm coals from the reserve around the fire's edge.

To slow down the fire, move hot coals out to make a larger oval; to increase heat, move hot coals in to make narrower oval. This technique helps maintain the even cooking. Fire is ready only when flames die down. In broad daylight, the coals will look ash-gray and after dark, they'll have a red glow (they burn from outside in).

If drippings do flare up during cooking, sprinkle the fire lightly with water to quench the blaze. Keep handy a clothes sprinkler filled with water close by. Use only enough water to do the trick; don't soak the coals. It will take some time for very wet coals to dry out and begin to burn again. It will also reduce the intensity of the heat of the fire.

Orders for "rare" go on the grill last. When you see little bubbles on top surface of the steaks, they are ready to turn (heat forces the juices to the uncooked surface). Flip steaks with tongs and a spatula; piercing with a fork wastes good meat juices. Cook the second side a few minutes less than the first since the second side has a head start on heating. Turn only once. For 1-inch steaks cooked medium-rare, allow 13 to 15 min¬utes total grilling time. It is always a good idea to use a meat thermometer when grilling. Insert thermometer so tip is in center of meat. Tip must not touch bone, fat, or the metal spit.

For charred crusty coat, try this: Sear one side by lowering grill top close to coals for 2 to 3 minutes, then raise grill to finish same side. Turn steak, and sear second side; again raise grill and complete the cooking.

Wait until you turn steak to salt it (same for burgers and chops.) Salt and pepper the browned side and then season the other side as you take it off the grill. If you salt uncooked meat, the juices will be drawn out and you'll lose good flavor. 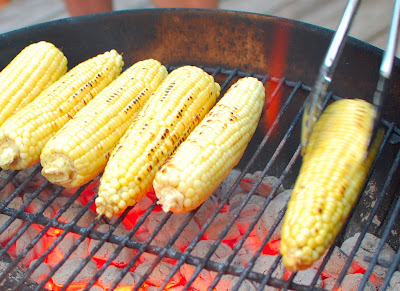 It is important to know how to carve a big steak, like a porterhouse or a sirloin, so that one person doesn't rate most of the choice portions, and another person get the tag ends. First remove the bone, cutting very close to it. Now cut across the full width of the steak, making 1-inch slices and narrowing them a little on the tenderloin side. Be sure everyone gets a section of the tenderloin. If steak has a tail piece slice it last to serve for second helpings.


When the steaks are grilled to perfection, serve them sputtering hot with a pat of butter and a squeeze of lemon. With the grill already “fired” up, it's a cinch to grill a few ears of fresh corn and some thick slices of red onion that have been brushed with olive oil. With some of Dom's potato salad, peach and mozzarella salad, and delicious grilled watermelon for dessert, you will have well-rounded and must-deserved treat for Dad on his big day!
June 19, 2011