In today's Living and Arts section of the Atlanta Journal-Constitution, Food Editor John Kessler poses the question(s): did you grow up in a culture that celebrated spicy food? If so, when did your palate adjust? And, do you have little kids who like hot foods as well as you do or more than you?

Much like Mr. Kessler's youngest daughter (whom he describes as spice intolerant,) growing up, I was the lone holdout in a house of "chile-heads." My father and grandfather would vie to see which could endure the hottest concentration of hot sauce until they both nearly succumbed to a spice-induced coma. This competition was typically followed by an Aquavit drinking contest, but that’s a story for another post!

My husband, Dom, enjoys dishes with the kick. He spent one summer going recipe to recipe through “The Whole Chile Cookbook” experimenting with different types of chilies from both ends of the Scoville scale; Ancho, Serrano, jalapeno, habanero, chipotle, etc. He is also a Cajun food junkie. In the early years of our 21-year marriage, we traveled to New Orleans for our annual visit to the mecca of cayenne and even once trekked to Avery Island to tour McIlhenny’s Tabasco® sauce factory.

Over the years he has learned to moderate the level of heat for my heat-judicious taste, but the dining room table is usually adorned with a dizzying array of hot sauces for himself and our guys. Although both boys admit they were more sensitive to the heat as little kids, both are now fearless when confronted by a plate of chili-laden sustenance. Maybe the spicy gene skips a generation (like the tendency towards having twins), or more likely, they became accustomed to the spices we used in our home cooking as they grew older. 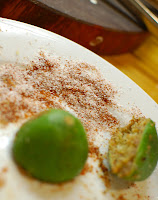 The attraction to spicy foods may lie in the chemical “capsaicin” which is found in the spines of certain peppers and causes your body to release endorphins. Endorphins block pain, but they're also responsible for feelings of pleasure as well. So capsaicin is, in fact, a natural painkiller and anti-inflammatory.

Our friend, Nidhi grew up in Bombay, India where spicy foods and curries reign supreme. Street food vendors in Bombay sell copious amounts of grilled corn on the cob rubbed with lime, chili powder and salt. She describes the flavor saying, “The combination makes a wonderful tingling sensation in your mouth.” At a recent get-together, she patiently taught our oldest the tricks of making this specialty. Over the years she, too, has learned how to tame the spice for more discriminating palates.

While I may not have graduated to the level of a proper chile-head, I have grown to like spicy foods. While I still err on the side of caution when ordering Thai pepper steak, I always order the cheese dip WITH jalapenos at our favorite Mexican restaurant, and need no accommodations when eating Nidhi’s grilled corn! 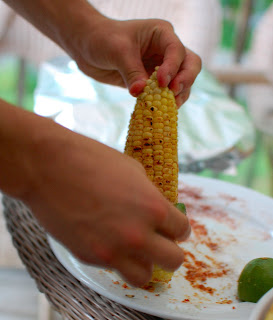 Heat a large pot of water to boiling. While waiting for water to boil, remove husks from the corn. Place the corn in the boiling water for 3-5 minutes. Remove from water, draining slightly, and then place the corn on a hot grill  and cook until lightly browned and nicely charred. Remove the corn from the grill and allow to cool until it can be handled without burning.

On a separate plate, place a mound of salt and a mound of ground chili pepper on opposite sides of the plate. Slowly drag salt and pepper to the center and mix together. It is better to start with more salt and less chili pepper for folks who do not like their corn terribly spicy. Taking a lime half, grind the salt-chili mixture into the lime and then rub (really rub) the spices and lime juice into the corn. The lime will pick up more chili (and thus more heat) each time you return to the plate for more salt-chili and continue to rub down corn cobs.

Enjoy the tingle of the spice and lime juice in contrast to the sweet, caramelized corn. You may want to have a glass of milk close by in the event the chili pepper takes over your taste buds. The lactic acid and fat in milk cuts the heat of capsaicin far better than water or alcohol!