From Rags to Riches: The History of the Dish Towel

The old cliché “everything old is new again” is completely true when it comes to the common dish towel. While every household has a few of these mundane, utilitarian sloggers, dish towels have again achieved popularity with budding foodies and designers. Bon Appetit magazine recently featured actress Gwyneth Paltrow. She describes her Thornback and Peel dish towel as "a standout in the kitchen."

Archeologists believe that towels were closely held as personal items (along with the ever present knife) as early as the Middle Ages. In the early nineteenth century, the "tea towel" became the linen of choice for the ladies of Victorian England who personally used tea towels when caring for their tea services to avoid breakage by careless servants. The tea towel's highly absorbent, lint-free and soft features appealed to ladies requiring the right towel to thoroughly dry their delicate china and serving pieces without scratching or leaving lint behind.

Flour sack towels are the most desirable dish towels because they are super soft, completely lint-free, absorb like a paper towel and dry faster than most kitchen towels, they add unsurpassed sparkle to dishes, glassware and windows. They make superb dusting cloths and have many culinary uses. They are used for dehydrating, straining cloths for stocks and sauces, poaching, cheese making, pastry, proofing bread, herb drying, grabbing warm dishes and they keep salads fresh for hours.

Clever marketing efforts on the part of producers and grocers of the 1800s began packaging flour, sugar and other food stuffs in cotton sacks instead of bulkier wooden barrels. The tightly woven bags that held flour and sugar were coveted for use as dish towels. Flour bags represented 42% of bag production while sugar sacks accounted for 17% of total bags manufactured. Usually, both flour and sugar bags held quantities of only five or ten pounds. Advertising slogans such as, “The best cooks are generous with sugar,” and “Food that is sweet is hard to beat,” could be found on sugar bags. Some of these were embroidered with Outline Stitch designs (sometimes Redwork) and the initials "NRA" (National Recovery Act)  as well as the words "we do our part."

In the mid-1920's, flour sack manufacturers recognized the increasing popularity of these cotton sacks with the nation’s thrifty homemakers, and began printing sackcloth (also known as “chicken linen,” "hen house linen,” or just “pretties”) with artistic patterns. Professional artists and local designers were commissioned to create the most desirable sack cloths on the market. Sellers found that they could influence the type of sugar, rice, cornmeal, flour or seed simply by the style or pattern of cloth the product was contained in. This recycling trend lasted from the mid-1920s through the Great Depression of the 1930s, and the war years of the 1940s until paper and plastic bags began to replace the cloth ones.

In our kitchen, we have an entire drawer dedicated to these venerated workhorses. We refer to them as “mupines” or “mup rags” (sorry Ross!). The term mupine most likely comes from the Italian vernacular; “moppina” (mop). But, author Joanna Clapps Herman in her essay for "Our Roots Are Deep With Passion," asserts that the term originates from the Italian word “mappina” (map) because maps used to be drawn on cloth. 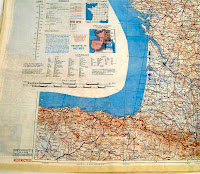 The use of cloth maps is as ancient as (or even older than) the dish towel. Archaeological evidence from ancient Chinese tombs indicates that maps showing trade routes were being drawn on pieces of silk as long ago as the second century AD. In Europe, novelty silk scarves decorated with maps of spa towns were popular during the 18th and 19th centuries. It was with the outbreak of World War II, however, that the idea of printing maps on fabric really came into its own. From early in the war, British airmen were issued 'survival kits' which typically included a small saw blade, needle and thread, currency, phrase cards, a tiny compass, and, most importantly, a silk map. These durable maps were infinitely easy to conceal whether sewn into the lining of a jacket or the hem of an undergarment or hidden in the hollowed-out heel of a boot, a silk map was unlikely to be found during a prisoner search.

The Food Network's Rachel Ray has recently adopted the term "moppine" to mean a towel sewn with hand pockets to be used as a pot holder, but real cooks have been using dish towels as potholders for centuries; no special pockets needed!

No matter what you call them or where they came from, it is abundantly clear that dish towels are a mainstay of our society and are here to stay. Even in these days of computerization and technological advances, cooks and homeowners alike cannot survive with these handy tools. Besides what would we clean the screens of our iPads with otherwise?