The word fork comes from the Latin word 'furca' for "pitch fork." A two-prong twig was perhaps the first fork. One of the earliest dinner forks is attributed to Constantinople in 400 A.D. In 11th century Venice, forks were censured as being an affront to God's intentions for fingers which resulted in the fork’s disappearance from tables for nearly 300 years.

With Charles I of England’s 1633 declaration, "It is decent to use a fork," civilized table manners became vogue. Because seventeenth century forks had tines were made of case-hardened steel that were quick to wear down, early fork tines were made extra-long in length with sharp pointed tips. Additionally, the number of tines on forks of this period increased from two to four.

By the nineteenth century, mass production and the invention of the electroplating process made silver forks affordable to individuals wishing to emulate the nobility and eat with forks. Long fork tines were no longer needed and tines were shaped to accommodate particular foods. Forks wrought with long tapered tines, such as a dinner fork, are made to spear thick morsels of food, such as steak, and smaller forks were designed for eating salads and desserts.

In addition to their usefulness, forks are also a symbol of friendship, shared meals and good company. We have always enjoyed this anecdotal story:

A young woman diagnosed with a terminal lymphoma was told she had three short months to live. So as she was getting her “affairs in order," she contacted her sister to discuss her final wishes. She told her which outfit she wanted to be buried in and which songs she thought might be appropriate at her memorial. 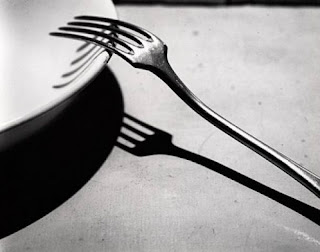 When the sisters had gone over all the final arrangements, the sister was preparing to leave when the young woman suddenly blurted out, "Oh and there's one more thing!" she said excitedly. "This is very important," the young woman continued. "I want to be buried with a fork in my right hand."

Her sister stood staring at her sibling, not knowing quite what to say. "That surprises you?” she asked. The young woman explained. "Don’t you remember that Grandma always used to say ‘keep your fork’ whenever she cleared the table. It was my favorite part of the meal because I knew that something better was coming, like her velvety chocolate cake or deep dish apple pie. Something wonderful and with substance!” The young woman continued to explain, “I just want people to see me with a fork in my hand and wonder, ‘Hey, what's with the fork?’ Then, I want you to explain to them that I kept my fork because the best is yet to come." Her sister’s eyes welled up with tears of joy as she hugged her sister not knowing if it would be their last visit or not.

At the memorial service, friends and family were walking by the young woman's casket and saw the fork in her hand. Over and over, her sister overheard the question "What's the deal with the fork?" And over and over again she smiled. During her eulogy, the sister spoke of the conversation she had with her sibling shortly before she died. She admitted that she could not stop thinking about the fork and told them that they probably would not be able to stop thinking about it either. She asked that the next time they reached for their forks, that they would remember ever so gently, that the best is yet to come.

And so, cherish the time you have, and the memories you share... Remember that being friends with someone is not an obligation, but a sweet responsibility. Friends are very rare jewels, indeed. They make you smile, and encourage you to succeed. They talk you off the edge of the cliff when you stand too close, they bring chicken soup when you’re sick, and always remind you to keep your fork!