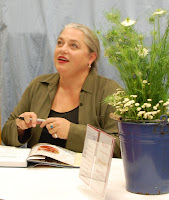 Dom and I joined a crowd of Southern foodies at The Cook’s Warehouse in Ansley Mall to congratulate Virginia Willis on the national release of her new cookbook, Basic to Brilliant, Y’all; 150 Refined Southern Recipes and Ways to Dress Them Up for Company. Atlanta-based celebrity chef Virginia Willis is a classically trained French chef with a Southern accent to her recipes and cooking. Beginning at her home teaching kitchen, the book signing fundraiser for the Atlanta Community Food Bank was the first stop on the Chef’s 10-city tour.

Place the greens in large bowl. Set aside. Stir together the vinegar, brown sugar, salt, and pepper in small bowl until the sugar dissolves. Set aside.

Heat the oil in a skillet over medium-high heat. Add the ham and cook, stirring occasionally, until crisp, 5 to 7 minutes. Using a slotted spoon, transfer the ham to a plate lined with paper towels. 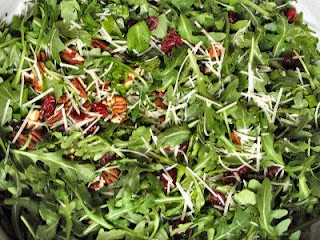 Add the onion to the skillet and cook over medium heat, stirring frequently, until translucent, 3 to 5 minutes; add the garlic and cook until fragrant, 45 to 60 seconds. Add the vinegar mixture, then remove from the heat. Working quickly, scrape the bottom of the skillet with a wooden spoon to loosen any yummy browned bits. Set aside to cool just slightly.

Pour the warm dressing over the reserved greens, add the ham, and toss gently with tongs until the arugula is slightly wilted. Taste and adjust for seasoning with salt and pepper. Divide among chilled serving plates. Sprinkle over the cheese and pecans. Season with freshly ground black pepper and serve immediately. Wonderful crisp arugula with seasonal Southern flavors - Yum Y'all!