Nitty Gritty Start To The Day

The season of sniffles is upon us and few things offer morning comfort like a bowl of creamy, steamy grits. Grits* are historically known as a food of the South, but they’ve been around much longer in one form or another. Grits are a traditional breakfast food made of ground dried corn kernels. In consistency, they are rather like the “Cream of Wheat” which is more popular in Northern states. 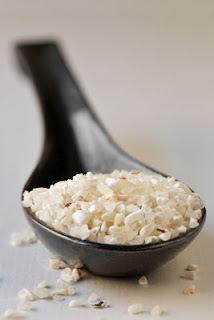 Rockahominie (hominy) dates back at least 5,000 years, and was one of the first foods that Native Americans shared with European colonists. This sturdy staple of dried corn kept many settlers alive during those first cold winters. Hominy is the dried kernel of corn that has been threshed to remove the hull and germ and soaked in a weak lye solution to make the kernels swell. To make grits, the dried hominy is ground to one of three grinds, fine, medium or coarse and is simmered with water until a thick porridge is formed. “Quick grits” (a very fine grind that has been pre-steamed) are available in supermarkets, but to quote the famous line from the movie My Cousin Vinny, “No self-respectin’ Southerner uses instant grits.”

It should also be noted that the Italians, got their corn meal for polenta by way of these same Native Americans, so contrary to Dom’s theory that all foods originated in Italy, grits has at least a 4,500-year head start on polenta.

Grits were also a vital part of the Southern diet during the Great Depression since they were inexpensive and required only water and lard or butter to make. During the same time period, the equally Southern expression, "nitty-gritty," originated as a derogatory term and was used as secret slang by segregationists. Southern politicians and campaigners adopted the phrase to refer to "back to basics" campaigns based around fundamentalist values and beliefs.

A proper bowl of grits has butter, salt and black pepper for seasoning. They are more savory than sweet. People have their individual tastes in grits. Some prefer a thinner consistency like polenta, while others like their grits thick and creamy. 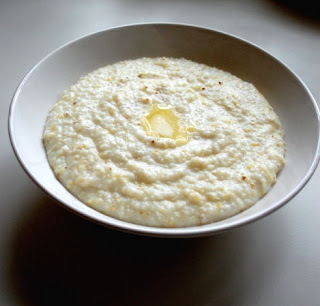 Bring water to a boil in a saucepan and add grits to water reducing heat to medium. The grits will be very watery at this point, but they will thicken nicely in a few minutes as the water is absorbed.

Grits should be allowed to simmer slowly so they don’t get lumpy. If they appear to be boiling excessively, turn the heat to medium-low. Stir consistently to ensure they cook evenly and do not stick to the sides of pan. Continue cooking and stirring until the grits thicken to just a littler thinner than your desired consistency as they will continue to thicken as they cool. Stir in the butter until completely incorporated. The grits should have a creamy, silky texture. Serve with freshly ground black pepper. For cheese grits, add ¼ - ½ cup of your favorite grated cheese.

To make grit cakes (great for leftovers), layer grits in a moistened baking dish, cover with plastic wrap and refrigerate. When the grits are chilled and firm, cut them into desired pieces, (moistened cookie/ biscuit cutters work wonderfully.) Fry in a lightly greased pan until both sides have a crispy brown crust.

*GRITS is also the acronym for "Girls Raised In The South."