Big Fun at the Big Grill!

Smoked wafted through the air as we approached the tented area that had been cordoned off for Taste of Atlanta’s kick-off party dubbed “The Big Grill” with proceeds benefiting Georgia Organics. The back area was brimming with Big Green eggs and the heady smell of cooking meat filled the air. Inside the atmosphere was very festive with decorated tables, cozy seating areas and ample drink stands (sponsored by Amstel Light). And the food… AH-mazing! 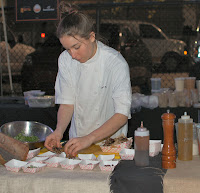 We started at the back with Serpas' crispy pulled duck on a cube of confit, Rathbun’s pork belly taco with banana mayonnaise, and JCT. Kitchen’s grilled quail breast with puffed farro and pomegranate reduction. 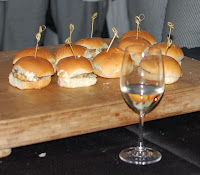 Stopping briefly to listen and enjoy the party tunes being sung by Atlanta’s popular Yacht Rock Schooner, we circled back to sample Lamb loin, with chick pea frites and smoked paprika aioli from Briza, mini shrimp and crab burgers with remoulade from Watershed and hanger steak sliders with pickled vegetable slaw and citrus crème fraiche from Ray’s on the River.

We were swooning from all the incredible flavors (and feeling a bit full,) so we avoided lines for samples of seared scallops with pumpkin risotto, braised brisket sliders and hyper-dressed burgers which stretched to Terre Haute. Instead we opted to give in to the temptation of The Barrelhouse’s banana pudding shooters with graham cracker streusel and lingering over pumpkin-chestnut and bourbon-burnt-sugar ice creams, Campari-blood-orange sorbet created by High Road Craft.

It was clear watching the jovial crowd that we were not the only ones who were enjoying indulging our palates with all the marvelous treats offered by Atlanta’s premier restaurants and chefs. And this is just the Kick-Off Party! We can only imagine the delights that await us tomorrow at the 10th Anniversary Taste of Atlanta festival. 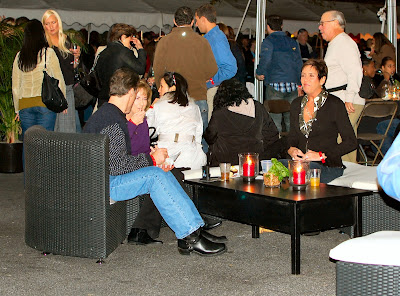