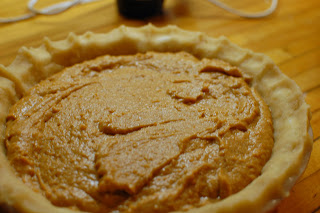 With cooler weather and Thanksgiving around the corner, ‘tis the season for making pies. It is also the season for sweet potatoes which we enjoy in many different forms; baked, mashed, and as fries or chips. A nutritional superhero, sweet potatoes are one of the best vegetables you can eat. The starchy, tuberous root vegetable is loaded with carotenoids, vitamin C, potassium, and fiber.
In an attempt to maintain the health benefits of the sweet potato, we revamped our decades-old recipe which originally called for sour cream and 6 egg yolks. We replaced the sour cream with 100% natural, low calorie plain Greek yogurt which contains whole milk, cream and cultures, and no added sweeteners, thickeners or preservatives. We also decreased the number of yolks to four to create a healthier version of the traditional Southern classic.

Preheat the oven to 350 degrees F.

We frequently have leftover mashed sweet potatoes, but you can also bake 2-3 sweet potatoes, allow to cool, and then place them in a mixing bowl and beat with a hand or stand mixer until smooth.

Add yogurt, brown sugar, cinnamon, nutmeg, yolks, and salt to the sweet potatoes and beat until well combined. Pour this batter into the prepared pie shell and then place onto an aluminum foil-lined sheet pan in the event any filling overflows the crust. 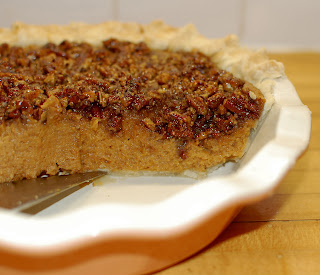 Toast the pecans by placing them in the pre-heating oven for 10-15 minutes. When cool to the touch, break into small pieces. Mix chopped pecans with the brown sugar and sprinkle evenly over the top of the pie filling, then drizzle maple syrup over the pecan topping.

Bake the pie for 50 to 55 minutes or until the custard reaches 165oF degrees. Remove from the oven and allow to cool. Because the filling contains eggs it is best to keep the pie refrigerated after cooling. Top with fresh whipped cream for an authentic Southern dessert.