Party At Ponce To Restore Building And Hope 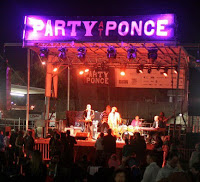 The Party at Ponce will most definitely be dubbed Atlanta’s party of the year! To kick-off the re-development of the 2.1 million square-foot property that was the first Sears retail store in Atlanta (which later became Atlanta City Hall East in 1991,) Jamestown Properties celebrated plans to transform the historic site once an amusement park called “the Coney Island of Atlanta,” and the original home to the “Atlanta Crackers” baseball team into an urban mixed-use “destination” named Ponce City Market.

The huge venue featured a stage in the back lot bordered by food trucks parked along the perimeter, and a multitude of tables laden with food samples prepared by the chefs of Atlanta’s most popular restaurants inside the building’s massive loading area. Attendees enjoyed the musical talents of the Party’s headliners the Indigo Girls, Shawn Mullins and Francine Reed as they snacked on treats from Atlanta's most celebrated chefs including: 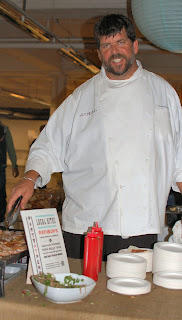 Food truck offerings included frozen treats from Westside Creamery and Honeysuckle, Korean-style tacos from Yumbii, a selection of tamales from the Tamale Queen and jambalaya, crawfish dip and beignets from Just Loaf’n. Party goers also had the opportunity to try a "Cat's Meow," the PAP signature drink created by a master mixologist from Rosebud made with lemon-&-lavendar-infused Cathead Vodka, agave nectar and ginger beer.

Overall, the evening was an enormous success with all proceeds from the “Party” benefiting and the Atlanta BeltLine Partnership and Georgia Organics. The future “Ponce City Market,” on land previously populated with natural springs known for their restorative properties, is certain to "restore" the building's usefulness and become the nexus of the four established neighborhoods and the future Atlanta BeltLine transit corridor.