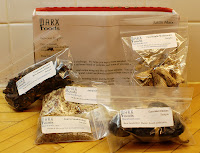 Imagine the excitement when we saw that Marx Foods was having another of its infamous foodie challenges! This time it was the Random Sample Challenge. We received a goodie box that included an Auburn rice mix, dried wild chanterelle mushrooms, Cascabel chilies, granulated dried New Mexican chilies and coarse smoked salt of which 2 of the 5 ingredients must be used in an original recipe creation. The contemplation began. It has been our experience that in most recipe competitions, the most “creative” (read outrageous here) concoctions win. So, we were all set to experiment with a smoke-salted, chocolate molé rice pudding, when Sonny (who could survive on buttered rice with black pepper alone) pointed out that we would not be able to enjoy the natural flavors of the rice mix once smothered in chocolate and chili pepper. So…

Changing gears, we decided to develop a recipe that would accentuate the natural flavors of the random goodies we had received starting (at Sonny’s request) with the Auburn rice blend of short grain brown rice and Himalayan red rice. The rice seed is the most important grain with regard to nutrition and caloric intake, providing more than one fifth of the calories consumed by the world's human population, since a large portion of the corn crops are grown for purposes other than human consumption. Most types of rice can be eaten as brown or white rice. When only the outer shell of a grain of rice (the husk) is removed, brown rice is produced. White rice is produced by further removing the next two layers (bran and germ) leaving the starchy endosperm exposed. Brown rice is more nutritious than white rice and has a chewy texture and mild nutty flavor. 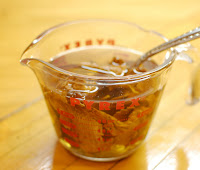 Being huge fans of chanterelle mushrooms, we decided to reconstitute and use them even though it is recommended that dried chanterelles be used in dishes where the mushrooms are to be pureed because they can be woody and tough. For the record, this was not true at all. When re-hydrated these high quality mushrooms were rich and complex with fruity undertones.

Next, we decided to grind and add in both types of chili pepper to add depth and zing. Realizing the resulting dish was an overindulgence in earthy, elemental essences; we went all the way and finished the plate with a light sprinkling of the coarse smoked salt. The deep natural flavors of each ingredient were accentuated by one another yet fused into the perfect combination of tastes and toothsome textures which made a wonderful accompaniment to roasted chicken. Of course, Sonny commandeered the leftovers, adding a splash of soy sauce for lunch the next day. 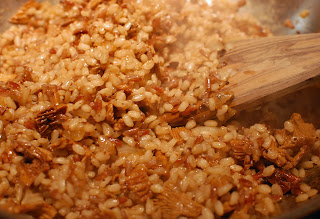 Rehydrate chanterelles by placing them in a cup of boiling water and allow to sit until the water is cool. (We soaked them overnight, but only because we remembered to do so.) Strain the mushrooms and reserve the water for cooking the rice.

Rinse the rice blend before cooking and add the rice and water to a pot.  Bring the water (and rice) to a boil, cover the pot, and reduce the temperature to low.  Let the rice simmer for about 20 minutes, then turn the heat off leaving pot covered to allow rice to steam for another 15 or so minutes until grains are plump and tender.

Toast dried chilies and allow to cool before grinding as this restores the fresh flavor and texture. Remove stems and grind the pepper using a coffee grinder. (You can use a mortar and pestle or pepper mill if you don’t have a coffee grinder.) 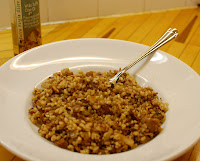 Meanwhile, heat olive oil in a skillet over medium heat. Sauté onion until soft then add chopped reconstituted Chanterelle mushrooms, continue to sauté until golden brown. Add ground chili peppers and mix well. Then carefully add the cooked Auburn rice and fold together completely coating the rice and cooking of any remaining liquid. Turn rice out into a bowl and finish by drizzling with truffle oil and finishing with smoked sea salt and freshly ground pepper.

Toast pine nuts in a pan on the stove, shaking the pan continually. When the nuts start to turn a light brown, remove from the pan and let cool on a plate until ready to use as a garnish. (Note: the pictures do not show the pine nuts, because of allergies.)