Technique of the Week: Boiling

Following the adage, you must walk before you can run, this week’s technique is boiling. This, however, occurred to me after last week’s segment of blanching, which of course requires the use of boiled water. In the 1940’s, it was not uncommon to hear someone say, “she’s such a poor cook, she can’t even boil water,” as women began enjoying professional advancement in the workplace. In fact, this was the premise of several classic movies including Katharine Hepburn’s Woman of the Year and Barbara Stanwyck’s Christmas in Connecticut. While the advent of microwave ovens has made boiling water as simple as pressing a button, it is still wise to have an understanding of the basic principles. Who knows, it might even come in handy if the power goes out.

Boiling is cooking food in a liquid (water, stock, or milk) at the boiling point of 212oF. The boiling point can vary with the atmospheric pressure affected by altitude or weather. Dissolved solids (like salt or sugar) will increase the boiling point of water as well, but the effect is minimal. The amount normally used in cooking will effect less than a 1 degree change. In order to make any significant difference, you would need to add it in vast quantities.

As the liquid heats in the process of boiling, tiny bubbles appear on the bottom of the pot and rise to the surface. Gradually, the bubbles increase in size until large ones form, rise rapidly and break which produces a constant agitation of the liquid. There are several factors that influence the rapidity with which water may be brought to the boiling point; namely, the kind of vessel used, the amount of surface exposed, and the quantity of heat applied.

While water that is hot from the tap obviously boils faster than cold water, it is better to use cold water instead because hot tap water will contain more dissolved minerals from your pipes, which can give your food an off-flavor. A good point to bear in mind in preparing foods by boiling is that slowly boiling water has the same temperature as rapidly boiling water and is therefore able to do exactly the same work.

Liquid boils faster when the pot it’s in is covered. A cover placed on the saucepan increases the pressure inside the pot which in turn increases the boiling point of the liquid. Because the liquid is in a confined area, the molecules are constantly bombarding into one another creating greater kinetic energy. A lid also prevents a loss of water by condensing the steam as it rises against the cover; as water boils, some of the steam flows back down in the form of liquid.

The main foods that are cooked using this method are eggs (toughening the albumin,) vegetables (softening the cellulose fibers) and pasta (rehydrating and cooking the dough). Meats are sometimes placed in boiling liquid to relax the tissue and dissolve the fat, and then the heat is reduced to allow the meat to simmer as in stews. Boiling most foods until done typically renders them shrunken and tasteless (this is where blanching comes in.)

In addition to cooking, boiling renders water safe since it destroys any germs that may be present. However, boiled water is known to lose flavor. As this change is brought about by the loss of air during boiling, the flavor can be restored by shaking it in a partly filled jar or bottle to add air. 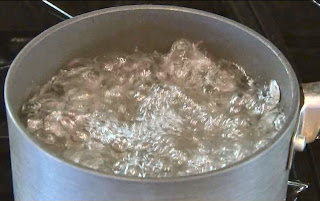 Fill pot about 2/3 to the top with cold water leaving room for expansion and agitation of the water’s surface. Cover pot and place on the stove top over high heat. The appearance tiny bubbles on the bottom of the pot indicate the water is close to the boiling point. Once water reaches a rolling boil (i.e., turbulently churning with large bubbles,) the heat can be reduced as extra heat is not necessary to maintain the boiling temperature. The boiling water is now ready for use in one of its many applications.