I was very excited when I received an email from Foodbuzz letting me know that we would be given an opportunity to try a bottle of Marzetti Simply Dressed® salad dressing as part of the Tastemaker program. I had a devil of a time deciding which bottle to choose from the enticing assortment which included Champagne, Ginger Sesame, Greek and Pomegranate. I finally selected Blue Cheese with the realization that it would be the most desirable to our teenage boys. I envisioned a “wedge salad” as I placed a head of iceberg lettuce in the cart, knowing full well that any remaining dressing would be used for hot wings and celery.

Alas, the best laid plans of mice and men… During Cross Country season, the guys arrive home in the evening STARVING. A phone call from Dom let me know that dinner would be delayed a while, so in a pinch I found a bag of Kettle potato chips in the pantry. Thinking quickly I turned the oven on 350oF and layed the some of the chips on a parchment lined (oven-safe) plate. I grabbed the bottle of Marzetti Simply Dressed® blue cheese dressing from the fridge and slathered the chips with dressing and popped them in the oven for about 10 minutes (as long as it took 2 boys to finishing showering and pour sodas into glasses.) Once removed from the oven I added a few freshly snipped chives (for Sonny’s benefit) to the plate and crumbled some blue cheese (originally purchased for the wedge salad) over the top.  And, of course, they ate every last chip before I could get a picture! 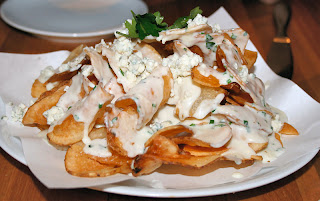 Needless to say the guys were not disappointed when I made a second plate for Dom’s arrival home. And Dom, who thinks everything tastes better topped with arugula that has been tossed with truffle oil and salt added his garnish to the dish. I guess I need to buy a least one more bottle.

Would you like to try a bottle of Marzetti Simply Dressed® salad dressing? Click here for a $1.00 off coupon.