The botanical name for the North American large-berry variety of cranberry, vaccinium macrocarpon, comes from the Latin words vacca, meaning cow (since cows seem to be fond of them) and macro meaning means large, with oval leaves. The English term “cranberry” derives from "craneberry" named because the plant's flowers that dip down and resemble the head of a crane (which grow in bogs where cranes make their home and the bird’s seem to like them as well.)

The Pilgrims learned about cranberries from the Native Americans, who discovered the usefulness of the berry’s benzoic acid as a natural preservative. Cranberry sauce became commonplace when General Ulysses S. Grant ordered it to be served to the troops during the Civil War in 1864. 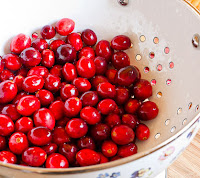 In 1912, "Ocean Spray Cape Cod Cranberry Sauce" became the first commercially canned cranberry sauce. Cranberry sauce is incredibly easy to make at home. There are differences in flavor preference depending on where the sauce is made. European prefer a slightly sour-tasting sauce, while in Americas prefer a more sweetened mixture.

The most basic cranberry sauce consists of cranberries boiled in sugar water until the berries pop and the mixture thickens. Some recipes include other ingredients such as slivered almonds, orange juice, zest, ginger, maple syrup, port, or cinnamon.

Rinse cranberries in cold water and remove any damaged or soft berries. In a medium-sized saucepan dissolve the sugar in the orange juice over medium heat. Stir in the cranberries and cook until the cranberries start to pop (about 10 minutes). Remove from heat and place sauce in a bowl. The natural pectin in the cranberries will cause the sauce to continue to thicken as it cools. 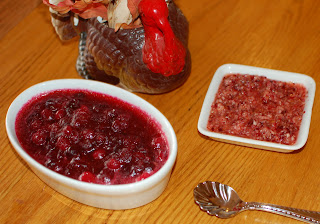 Rinse cranberries in cold water and remove any damaged or soft berries. Wash the orange (yes, the whole orange) and cut the whole orange into quarters. Place berries and orange quarters in a food processor and pulse until pieces are minced to your desired consistency. You may need to do this in batches depending on the size of your food processor.

Pour mixture into a bowl and add sugar stirring to mix. Place in the refrigerator and allow to rest for 30 minutes. Stir relish again just before serving.