Technique of the Week: Stuffing

In cooking, stuffing or filling is an edible concoction used to fill a cavity in another food item. Many foods may be stuffed, including meats, vegetables, egg, and fruits. In addition to stuffing the body cavity of animals, including mammals, birds, and fish, various cuts of meat may be stuffed after they have been deboned or a pouch has been cut into them. Many types of vegetables are also suitable for stuffing after their seeds or flesh has been removed; tomatoes, peppers, and mushrooms are common items for stuffing. 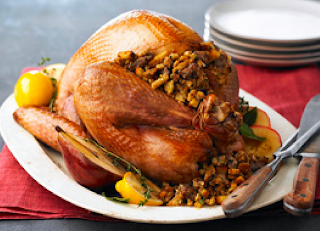 The term stuffing usually refers to the mixture placed into a turkey for the traditional Thanksgiving meal, while dressing denotes the same mixture cooked outside the bird. Turkey stuffing usually consists of bread crumbs or cubed, dried bread, with onion, celery, salt, pepper, and other spices and herbs such as oregano, sage and thyme.

Almost any ingredient may serve as stuffing such as contain bread, rice, vegetables, fruits, nuts, herbs cheese and even tofu. Oysters are a traditional stuffing component for Thanksgiving. In England, a popular stuffing is sausage seasoned with sage, onion and apple. Other types of fruits and dried fruits are often added to stuffing including prunes, apricots and raisins.

The Roman cookbook "De Re Coquinaria" (c. 1498) includes the earliest documented recipes for stuffing for chicken, hare, pig, and even dormouse. Most of the stuffing mixtures described used vegetables, herbs and spices, nuts, and stale bread, and frequently include organ meats such as chopped liver or sweetbreads. Stuffing has been known been several names throughout history including “farce,” “stuffing,” “forcemeat,” and “dressing.”

It should be noted that the United States Department of Agriculture (USDA) cautions that cooking animals with a body cavity that is filled with stuffing can present potential food safety issues. Even when the cooked meat reaches a safe temperature, the stuffing inside may still contain bacteria (and if the meat is cooked until the stuffing reaches a safe temperature, the meat may be overcooked). The USDA recommends cooking stuffing /dressing separately from the bird and not buying pre-stuffed birds. Of course, stuffing is not recommended for turkeys that are to be fried, grilled or smoked.

Recipes using the technique of stuffing: