Technique of the Week: Brining

Meats soaked in a brine solution prior to storage last longer without spoilage which is why brining was a method used to preserve meats for prolonged periods of time prior to the introduction of refrigeration. Brining is no longer used to preserve food but rather to tenderize and flavor it. Lean and often mildly flavored meats with a tendency to overcook losing much of their natural moisture like chicken, turkey, and pork making them good candidates for brining. Many types of seafood also take well to brining, especially when they are subjected to cooking methods that cause extreme moisture loss as is the case with most recipes for shrimp and other fleshy crustaceans.

Soaking meat in a salt-saturated solution causes the muscle tissues of the meat to absorb water through osmosis.  Once the water is absorbed, denaturation causes a sticky matrix which forms a moisture barrier that captures and prevents the water from leaking out as the meat cooks. These two processes yield tenderness and a unique flavor.

Some cheeses are also washed in brine to enhance the ripening process. Not only does the brine carry flavor into the cheese, but the salty environment nurtures the growth of the specific bacteria, which impart pronounced odors (Limburger) and unique flavors. The same bacteria can also have some effect on cheeses that are simply ripened in humid conditions, like Camembert. Accumulations of these "smear bacteria" show up as a sticky orange-red layer on some brine-washed cheeses. 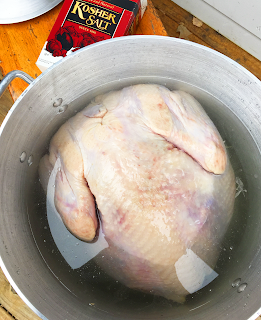 Plan for about 1 quart of brine for each pound of meat. If using a 5-gallon bucket, you will not need more than 4 gallons (16 quarts) of brine.

Combine the salt, sugar, and COLD water in the 5-gallon bucket. We recommend that you line our bucket with a kitchen garbage bag for easy clean-up. Place thawed meat (with any innards removed) in the brine solution. If necessary, weigh down meat (a plate works well) to ensure it is fully immersed. Cover the container set in cool area for up 1 hour per pound (for not less than 30 minutes) up to 8 hours or overnight. Remove meat from brine and pat dry and discard brining solution. The classic French way to cure pork is to brine it. Typically, brine for curing contains salt, sugar, herbs, and spices. It acts as a marinade and a cure at the same time, producing pork a bit like a mild ham.  Flavored brines can be made from fruit extracts, various herbs, and even alcohol including beer and liquor. One of the most appealing aspects of flavor brining is the freedom to create your very own flavor using the ingredients of your choosing. Examples include: black peppercorns (1 tablespoon); allspice berries (1 teaspoon); fresh rosemary or sage (2 sprigs); or, bay leaf (2 whole) to name a few.