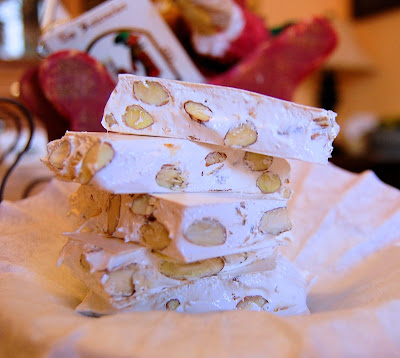 Every year one of Dom’s friends would bring a box of La Florentine Torrones from Rulli Brothers in Youngstown for the holidays. Our friend did not go home this year, so Dom found himself “torrone-less.” I researched and found this recipe. The first batch did not set up properly; I don’t think I beat it long enough. But, the second batch was a huge success and received rave reviews from all our local connoisseurs.

Torrones are a traditional Italian Christmas treat. According to legend, the nougat confection originated in the 15th century when a sweet made with honey, egg whites, and almonds were offered at a wedding of Italian nobles. The nougats were made in the shape of the Torrazzo of Cremona in Lombardy, Italy. The Torazzo is the bell tower of the Cathedral of Cremona, and the source of the candy’s name “torrone.”


Combine honey, sugar, and corn syrup in a saucepan. Cook over medium heat, stirring occasionally, until mixture the sugar has dissolved and a candy thermometer registers 300 degrees F in temperature. Remove from heat immediately. Watch very closely because once the caramel reaches 300 degrees it can scorch easily.

Meanwhile, put egg whites and cream of tartar into the bowl of an electric mixer fitted with the whisk attachment. Beat on medium-high speed until stiff peaks are formed, then raise the speed to high. Slowly pour in a thin stream into the egg white mixture, and beat until the mixture has cooled and thickened and begins to stick to whisk for about 10 minutes. Reduce the mixer speed to medium-low and beat in vanilla and almonds. Working quickly, spread the mixture into a greased and floured 9” x 13” baking dish.* To spread evenly, I grease a sheet of parchment and place it greased side down on the top, and push the nougat flat in the dish.  Let cool on a wire rack for at least 3 hours, or overnight. 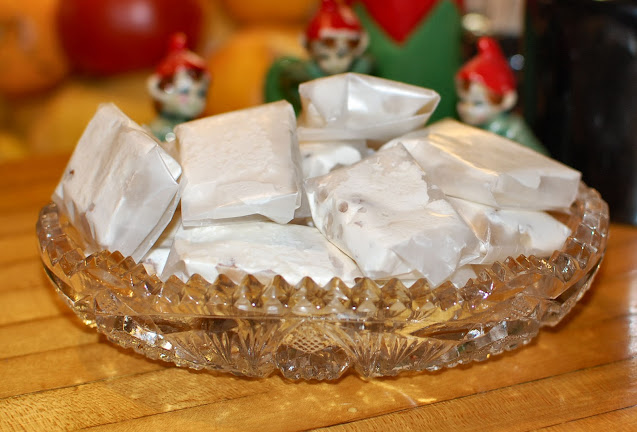 Cut around the edges of torrone to loosen. Remove from baking dish and transfer to a cutting board. Trim edges to be straight. Using a long, sharp knife, cut the candy crosswise into 3/4-inch blocks. Torrone can be stored between layers of parchment in an airtight container for up to 2 weeks.

*You can use edible rice paper when available on the top and bottom of the torrone. This prevents sticky fingers when eating and adds a professional touch.