Technique of the Week: Mulling (for Cycling Santas)

Mulling is a centuries-old practice in which various spices and fruit essences are infused into heated juices, wines, ciders or brandies. The ingredients used in this infusion are known as mulling spices. The recipes for mulling spices may vary somewhat, but in general they include allspice, nutmeg, cloves, cinnamon, star anise and various dried fruit peels. The essences of the mulling spices create a complex undertone of spicy and citrus flavors which complement the basic fruit elements of the mulled beverage.

The process of mulling was first used with wines which prior to refrigeration and modern bottling techniques, went bad pretty quickly. To delay spoilage (and make spoiled products taste less disgusting,) spices began to be added during the Renaissance period. Since young wines were commonly bottled during the early fall, “mulling” was necessary by Yuletide as some were beginning to reach the undrinkable stage, hence how the consumption of “mulled” beverages became a holiday tradition. Apple cider was another autumnal product which lent itself to mulling. Physicians of the period also believed that mulled beverages were curative acting as a kind of vaporizer and conduit of other foodstuffs to every part of the body, and the addition of fragrant and exotic spices would make it even more wholesome. 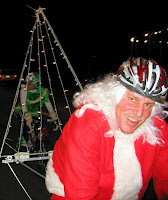 These “therapeutic” properties made mulled cider the perfect choice for celebrating the 5th annual Atkins Park Santa Ride benefiting The Leukemia & Lymphoma Society last Wednesday. Cyclists dressed in Santa suits and bikes decked out with trees, lights and tinsel rode through the streets of the Virginia-Highland neighborhood braking several times en route to revel and share some holiday cheer.

We were very excited to be part of this year’s festivities. Dom and other members of the Morningside Dads’ group hosted a “holiday cheer” station near Piedmont Park featuring hot mulled cider for the merrily-clad riders. Using a small camp stove, the mulled cider was steaming hot as riders stopped to imbibe and socialize. 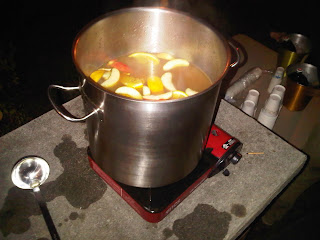 Wrap cinnamon sticks and whole cloves in cheese cloth and tie tightly. Place apple cider in a stock pot with the wrapped cinnamon and cloves, and apple and orange slices and bring to a boil. Add the brown sugar and ground spices and stir to dissolve sugar. Reduce heat and simmer for 10 minutes before adding rum. Ladle into mugs and make merry!