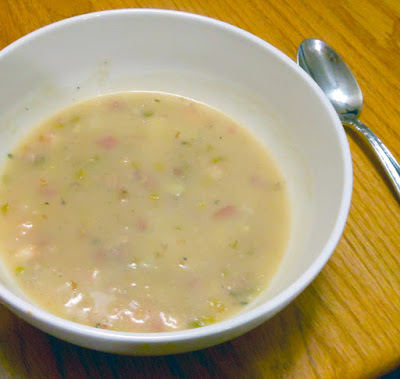 Soup is one of the oldest forms of food right up there with bread.  Although it was not until the invention of waterproof containers, about 9,000 years ago, that soup came into existence, the fact that an entire month is devoted to celebrating soup is a testament to its continued universal popularity.

Soup can be dated back to about 6,000 B.C. and was first made of hippopotamus (disgusting, eh?). Soup is made by combining ingredients, such as meat, vegetables or beans in stock or hot water, until the flavor is extracted, forming a liquid meal. There are lots of variations on the basic theme of soup, each offering a wide range of nutritional benefits.

Soup, first known as "sop," was originally a piece of bread served with some type of broth. People used to pour sop over a piece of bread or over broken off chunks of bread in a platter allowing it to soak up all the broth and then they would eat it.  As time went by sop was placed in deeper bowls and the liquid became the focal point instead of the bread. In modern day, the word sop is used to define the act of sopping up food.

Every country in the world has soup recipes and family traditions from long ago so it comes as no surprise that soup is a favorite in most households. We have all been nursed back to health with chicken noodle soup, warmed on a frigid day by a hot bowl of tomato soup with grilled cheese sandwiches and celebrated holidays with green bean casserole with cream of mushroom soup.

New England-style chowder is a favorite in our family with the ingredients varying depending on what is fresh at the market and what we have on hand.  This is the basic formula, but don’t be afraid to experiment to create a chowder that will become your own family recipe to be handed down to the next generation. 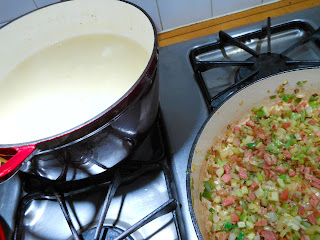 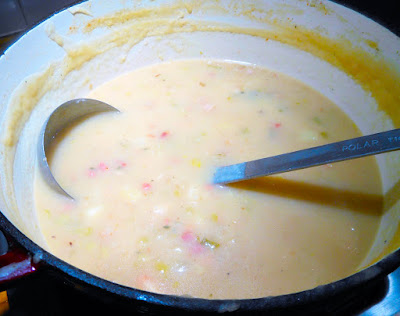 Heat a medium skillet over low heat adding enough olive oil to coat the bottom of the pan. Add ham and cook for 5 minutes and then add onion and celery and cook, stirring, until soft.

In a separate stock pot, bring stock and bay leaves to a simmer. Add diced potatoes and cook for about 15-20 minutes, until just tender.

Add ham and vegetable mixture to the stock pot and stir to mix well. Then add shrimp, clams, and fish, and simmer for 5 more minutes.

Next, add cream and season the chowder with cayenne, salt, and white pepper.

Remove the bay leaves and serve hot with parsley and Old Bay seasoning. We put some hot sauce on the table too.