Technique of the Week: Marinating

Marinating is the technique of soaking food, especially meats, in a seasoned liquid before cooking. Like brining, it is commonly used to flavor foods and to tenderize tougher cuts of meat. The liquid used is a 'marinade' is often acidic with ingredients such as vinegar, lemon juice, or wine or an enzymatic such as pineapple or papaya juices. The acidic ingredient softens the food, allowing it to absorb the flavors of the sauce.

Along with an acidic liquid, a marinade often contains oils, herbs, and spices to further flavor the food items. Marinating works on all kinds of meat, fish, tofu and even vegetables. Different cuisines utilize varying marinades. For example, yogurt-based marinades with a mixture of spices are used in Middle-Eastern dishes and a teriyaki marinade is common for Asian dishes.

Generally speaking, most meats (beef, pork and chicken) should be marinated for at least 2 hours (up to 24 hours), while fish should only be marinated for 30 or so minutes before it starts to turn “mushy.”Foods should be marinated in the refrigerator, rather than at room temperature. Re-sealable plastic bags are the most convenient and safest vessels for marinating rather than bowls or other containers. They cut down on cleanup and allow you to evenly distribute the marinade. You should not use an aluminum container or foil for marinating because a chemical reaction could spoil the food. 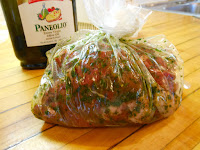 If you plan to use your marinade as a finishing sauce or for basting, it should be boiled for several minutes before using to kill any bacteria from the raw meat or vegetables. You should ever reuse the marinade for another recipe or meal.
Mint Marinade for Lamb:
¼ cup olive oil
1 tablespoon lemon juice
½ cup fresh mint leaves, cleaned
2 teaspoons kosher salt
2 teaspoons sugar
2 teaspoons freshly ground black pepper 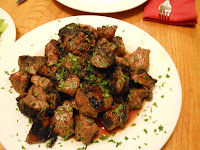 Combine all items in food processor and pulse several times until all ingredients are well chopped and combined. Pour marinade over lamb in a plastic bag and mix well to ensure that all meat is well coated. Allow to sit in the refrigerator for up to 24 hours before cooking. Periodically “massage” the bag to re-distribute marinade over the meat.
When ready to cook, remove meat from bag and cook to preferred doneness and toss marinating bag away.