Technique of the Week: Stewing

On a cold, damp day, few things are more pleasing than a rich and steaming bowl of stew. But, what exactly is “stew”? Stew is not only the name of a dish, but it is also its cooking method.

Stewing is the process of cooking ingredients slowly in a flavorful simmering liquid in a closed container which obviously requires a leak-proof vessel for cooking. Cooking by boiling has occurred for literally tens of thousands of years. In fact, primitive tribes are thought to have used conch or turtle shells to boil water. The development of pottery some 10,000 years ago was the impetus for the development of several dishes named for the container used to prepare them including (but not limited to) tagines, casseroles, and stews. The technique was refined over the years with references to more modern stews found throughout recorded history, from the lentil stew in the Biblical story of Cain and Abel to Hungarian Goulash with paprika in the 1700’s and Lord Byron’s reference to Irish Stew in “The Devil’s Drive” in 1814. 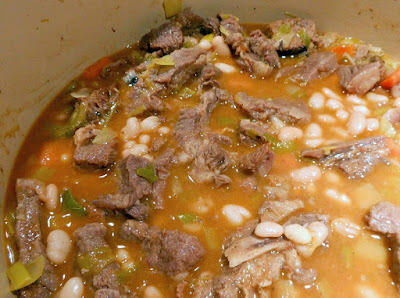 Types of stews exist all over the world which are referred to by a variety of names: French Cassoulet, Italian Cioppino, Beef Bourguignon, Pot au Feu, Kentucky’s burgoo, Louisiana’s gumbo, and even Chili con Carne. While stewing is easily confused with braising, there are a few distinctions between the two. In a stew, the meat is generally cut into smaller pieces rather than left whole and in a braise, the liquid might only come halfway up the sides of the meat whereas the meat is immersed in cooking liquid when stewed.

The best cuts of meat for stewing are the toughest cuts. Prime stewing candidates include shank, brisket, chuck, oxtail and beef round. Stewing meats are not limited to beef, though. Irish stew shines because of lamb or mutton, dark meat chicken is the base for Coq au Vin, fleshy fish stars in Caldeirada de Peixe and French Ratatouille is just stewed vegetables.

The general method of preparing a stew is to sear meat on all sides in a little oil in a Dutch oven (or whatever pan you’ll be stewing in) until deep brown and then setting the meat aside. In the same pan, chopped mirepoix (onions, carrots and celery) or trinity (onions, celery and green pepper) are cooked until golden brown. Dried herbs and spices are added at this point. The pan is deglazed with liquid (stock, water, wine, beer, etc.) The meat is added back to the pan and liquid is added to cover the meat, and bring it to a simmer. Frequently, a starchy ingredient is added to thicken the stew before serving. Examples of these include potatoes, beans, corn, and rice, or in the case of gumbo and burgoo, fresh cut okra.