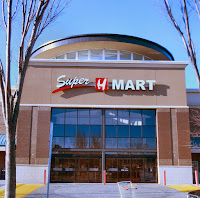 It is easy to get stuck in your usual routine which includes going to the same stores for the same items time after time. We go to DeKalb Farmer’s Market for produce and spices, Costco for meats and staples, Whole Foods for seafood… you get the drift. Occasionally, we head out to the Buford Highway Farmer’s Market (BHFM) for a different selection of produce or for a wider variety of Asian products.

It had been a while since we had been to BHFM and we had accumulated a list of items we were looking for to restock the pantry or to try in new recipes. As I was headed to the market, I remembered reading that several new Super H Marts had opened in the Atlanta area. The supermarket chain which began in 1982 in Queens, New York City as a corner store, is operated by the Hanahreum Group. "Han Ah Reum" is a Korean phrase meaning "arm full of groceries.” 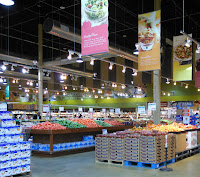 So, instead of exiting Interstate-285 at Buford Highway, I continued west for two more exits to visit the new Doraville H-Mart. I walked into a well-lit, hyper-clean store with neatly-stacked, super-fresh produce and rows and rows of tidily arranged packages. One aisle had every kind of tea from every region of the world, while another had a massive variety of grains and pastas. While the Asian staples were somewhat mixed (e.g. Korean, Chinese, and Japanese chili pastes or seaweeds), the Hispanic items tended to be shelved separately. The large refrigerated cases and freezers had a plentiful selection of meats.

I was euphoric! I roamed the aisles marveling at all the wondrous food stuffs and chatted with other shoppers. 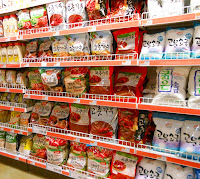 One shopper who drove from Marietta to buy items for Lemongrass Thai Restaurant, helped me select from the dizzying array of soy sauces. I had found everything on my list with the help of several very helpful and friendly employees. I then headed to check out which again was clean and well organized. A cheery clerk explained the benefits of joining the free shoppers’ reward program and waited patiently while I filled out the forms being sure to ask for my receipt so I would be credited for that day’s purchases. Needless to say, I will be using my frequent shopper card, as I will definitely be returning to H-Mart very soon! 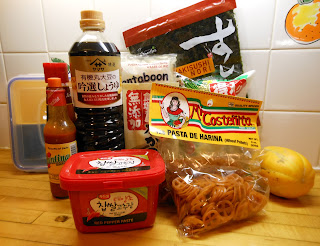 For our readers who do not live near an H-Mart location, they offer free shipping for new on-line customers for orders over $50 and free shipping on many bulk items. Click here for more details!