Technique of the Week: Sprinkling

Okay, you caught us! Sprinkling may not be considered as an officially recognized cooking technique, however, you might be surprised to learn that renowned chef; Jacques Pepin refers to “sprinkling” no less than four times in his cookbook, Jacques Pepin's COMPLETE Techniques.

The dictionary definition of sprinkling is: a small quantity of an ingredient scattered or sparsely distributed at random and falling in scattered drops or particles. Baking “sprinkles” were actually named for the action used to dispense them onto cakes, donuts, cupcakes and ice cream. Powered and granulated products such as salt, sugar and flour lend themselves best to being sprinkled. Other ingredients that are often sprinkled include grated cheese, chopped herbs, spices and seeds. 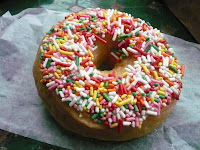 Previous recipes that include the technique of sprinkling: