Technique of the Week: Corning

Color us confused! In celebration of St. Patrick’s Day, people will dye almost anything green from potatoes and pudding to beer. So what is the deal with the pink-hued brisket otherwise known as corned beef? And, what exactly is corning?

The exact origins of the corning technique have been lost to history; however, it most likely came about as a method for preserving meat by salt-curing. The term “corn” stems from Old English and is used to describe any small, hard granules or kernels. In the case of "corned beef," the word refers to the coarse granular salts that were used to cure the beef.

The Irish certainly cooked corned beef on occasion, but it was actually rashers (Irish bacon) and colcannon (cabbage and mashed potatoes) that was their annual tradition. While most Irish families did own cattle, they were kept to provide milk (and the butter and cheeses made from the milk.) Corned beef was considered a luxury product in Ireland, so it wasn’t until the Irish immigrated to the United States that they began to eat the corned beef dishes known today because it was inexpensive and readily available in America.

Corned beef actually features prominently in many cuisines, including the Jewish and Caribbean cuisines. Corned beef is also a main part of the German dish Labskaus, well known during World War II and still served today in restaurants on Germany's Northern coast.

You are probably thinking, “That is all wonderful background information, but exactly why is the meat pink?” In corning beef, most manufacturers add saltpeter (potassium nitrate) or sodium nitrite as a food additive because it prevents growth of the bacteria that causes botulism. It also alters the color of preserved fish and meats when it combines with the meat’s natural pigment in a series of normal chemical reactions. 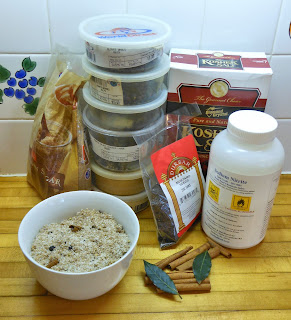 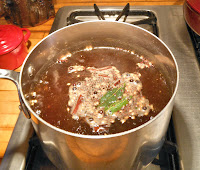 Place the water into a large 6 to 8 quart stockpot along with salt, sugar, saltpeter, cinnamon stick, mustard seeds, peppercorns, cloves, allspice, juniper berries, bay leaves and ginger. Cook over high heat until the salt and sugar have dissolved. Remove from the heat and add the ice. Stir until the ice has melted. If necessary, place the brine into the refrigerator until it reaches a temperature of 45 degrees F.

Once it has cooled, place the brisket in a 2-gallon zip top bag and add enough brine to fully cover the meat while still being able to seal the bag. Seal and lay flat inside a container, cover and place in the refrigerator for 10 days. Check daily to make sure the beef is completely submerged and mix the brine. After 10 days, remove the brisket from the brine, rinse well under cool water and cook as desired.