Technique of the Week: Deveining

Generally speaking, deveining is the process of removing veins from meat. It can also refer to the removal of fibrous or inedible “veins” of vegetables such as peppers or celery. Nikkur is the procedure of removing the sciatic nerve and any forbidden blood vessels and fats from the hindquarters of slaughtered animals to make meat kosher. In Yiddish, this process is called “traibering.”

Goose or duck livers (foie gras) also have veins that are classically removed prior to cooking although some chefs prefer not to devein the foie gras, as the veins can help preserve the integrity of the fatty liver. To remove the veins, unwrap the liver and blot it with a paper towel. The liver should be pale beige in color.

Each liver consists of two lobes, one slightly larger than the other. Remove any pieces of thin, white membrane clinging to the outside. Gently pull apart the lobes with your hands, noting that they are connected by a vein through the center of the two lobes. Cut this vein with a sharp knife. Hold one lobe firmly in your hand and with a pair of flat-end tweezers, grasp the end of the vein that was severed. Gently pull with a slow, even motion. In the best case, the gentle pull will cause the rest of that portion of vein hidden inside the liver to pull free. 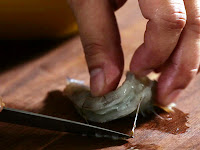 Deveining is also a technique used to prep shrimp for cooking which has actually nothing to do with veins. Deveining a shrimp means removing the black threadlike digestive tract that runs along the back of the crustacean. Removing the harmless tract is not necessary but makes the shrimp more aesthetically pleasing especially when larger shrimp are being used. While there are several deveining tools on the market, you can easily make do with a paring knife. Peel the shrimp first, run the tip of a sharp knife along the shrimp's back, and then lift out the delicate black vein, removing any pieces that break off with your fingers.