Technique of the Week: Puréeing

Purée is a term used for cooked food that have been ground, pressed, blended, and/or strained to the consistency of a soft creamy paste or smooth, thick liquid. In 13th century France, the term meant “purified” or “refined.” 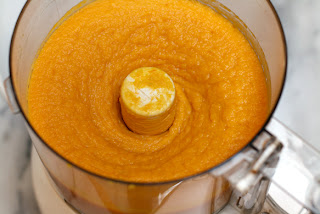 Purées can be made in a food processor or a blender, by forcing the food through a sieve or strainer, or with special equipment such as an immersion blender, potato masher or ricer. Purées are generally cooked to improve flavor and texture and reduce their water content. Vegetable purées thinned with water or stock are usually used as a base for soup or eaten as a side dish. Tomato purée, used for sauces and soups is made by removing seeds from blanched tomatoes and straining the pulp. Fruit purées are used to make sauces, mousses, soufflés and other preparations. Purées can also be made from anchovies, chicken livers, shrimp or salmon, and used as a filling for canapés.

Specific foods that have been puréed of are often known by their ingredients such as mashed potatoes or apple sauce. Purées overlap with other dishes with similar consistency, such as thick soups, custards and gravies although these terms often imply more complex recipes and cooking processes. The term “puree” is not commonly used for paste-like foods prepared from cereal flours, such as gruel or muesli; nor with oily nut pastes, such as peanut butter.

Some of our recipes that include the technique of puréeing: