Technique of the Week: Slicing 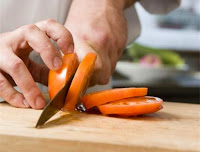 Slicing is the cutting of food into thin, relatively broad slices. Slices may be used as they are or processed further to produce other specialty cuts such as rondelles, diagonals, obliques, and lozenges. Slicing may be accomplished by hand or machine. A mandolin slicer greatly increases both the speed and uniformity of slices. Mechanical slicers include rotary slicers (smaller versions of those found in a delicatessen) and food processors with a slicing attachment. 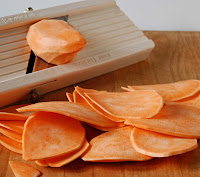 To slice ingredients with a knife, angle the tip of the knife down toward the cutting board and place the food underneath the knife tip. Hold the food in place with your opposite hand, keeping fingers curled so that only the knuckles come into contact with the side of the knife. Move the knife down and forward to slice through the food. Finish the cut with the heel of the knife flat against the cutting board. To continue with the second slicing stroke, raise the heel of the knife and pull the knife back, placing the food again toward the tip of the knife. Continue this motion, making sure that your slices are uniform and the desired thickness is achieved. This method produces what is known as a “straight slice.” 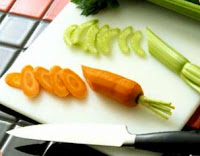 The second most common type of slice, the diagonal (also known as bias cutting) slice uses the same technique as straight slicing, but you hold the food at a 30-degree angle. This method is commonly used when preparing vegetables for Asian dishes. The diagonal slice results in a slightly larger slice and adds a bit of artistic flair to any meal.