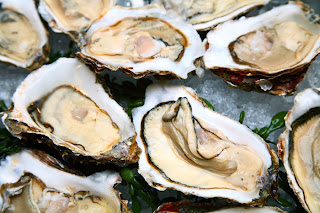 The word oyster is used as a common name for a number of distinct groups of bivalve mollusks which live in marine or brackish habitats. Briny, buttery, sweet, metallic, with notes of cucumber or seaweed; an oyster is nothing if not a pure recollection of the water from which it comes. Freshly shucked and eaten straight from its shell, no other food is so true to its origin which is probably why oysters are one of Dom’s and my favorite indulgences. Served on the half shell over ice with a drop of Tabasco or a dribble Mignonette sauce, fewer dishes are simpler or more satiating.

For centuries, oysters have been considered an aphrodisiac. Researchers have found that there may be some truth to this notion. Oysters are rich in all 9 amino acids that trigger increased levels of sex hormones and that their high zinc content aids in the production of testosterone. Oysters are also an excellent source of protein, zinc, iron, calcium, selenium as well as Vitamin A, Vitamin B12 and omega-3 fatty acids. Oysters are low in calories and are considered to be most nutritious when eaten raw. 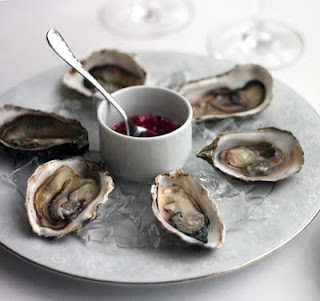 It was once assumed that oysters were only safe to eat in months whose names contained the letter ‘r’ because oysters were much more likely to spoil in May, June, July, and August. The ‘R’ rule goes all the way back to the 1700s (or earlier) when reliable refrigeration was not available. This is no longer an issue considering advances in coolants and shipping.

However, shellfish consumption in summer months can still be problematic. Because oysters are filter feeders they are affected by blooms of algae (known as red tides) that collect along coastlines, usually in warm weather. This alga spreads toxins that are soaked up by oysters, clams and mussels.

Oysters continue to top the list of foods high in risk for Listeria contamination for pregnant women, children and the elderly, yet there is a far greater risk of exposure of this bacterial infection from eating raw fruits and vegetables, soft serve ice cream and sliced deli meats.

Lastly, most shellfish spawn in the summer. As any oyster aficionado knows, a fertile oyster turns unpleasantly thin, milky and soft which is far from ideal for eating. While oysters can be genetically modified so they do not spawn, many vendors simply avoid this problem by importing their shellfish from cooler climates.

Mix all ingredients together in a small serving bowl. That’s it. The sauce does improve if you let the shallots macerate in the vinegar for a bit before using. Hard to believe there is such a fancy name for something so easy to make, eh? The French term "mignonette" originally referred to a bouquet garni of peppercorns, cloves, and spices used to flavor dishes, but now it simply means cracked pepper. Though different mignonette sauces use different types of vinegar, all contain pepper.