Post by Sonny Romeo
Last year, we visited Key West for a lovely day trip. Dad and Mom had always wanted to see the Florida Keys and we were in Palm Beach so they figured why not drag us along for the “experience.”

It was about a 4-hour drive from West Palm which actually went by relatively quickly. The trip included crossing the famous and historic 7-mile bridge which connects the city of Marathon in the Middle Keys to Little Duck Key in the Lower Keys.  It has spectacular views of the Gulf of Mexico and the Atlantic Ocean on either side.  When this bridge was completed in 1982, it was considered the longest segmented bridge in the world and was built to withstand winds of up to 200 miles per hour.  The 65-foot tall bridge is the highest point in the Florida Keys built to allow boats and ships to pass underneath. If you've never made the drive before you have to do it at least once in your lifetime.

When we arrived in Key West, we were all starving so we drove down Duval Street in search of sustenance. We saw several restaurants that looked promising including Jimmy Buffet’s Margaritaville, but Nic and I convinced the folks to go to the Hard Rock Café. I ordered a burger (amazing at every Hard Rock I’ve ever been to) and was about to order a coke when the waitress asked if I wanted a “Mango Tango” which she described as “kind-of like mango lemonade with a kick.” I was parched as well as hungry so I went for it. It was just about the best drink I have ever had! 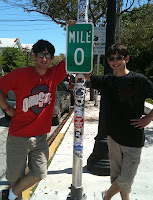 We spent some time strolling along the notorious Duval Street.  Duval Street is the famous downtown street where all of the restaurants, bars, and shops are located.  The street runs north and south from the Atlantic Ocean to the Gulf of Mexico. We ended up in Mallory Square which is considered the heart of downtown Key West.  On the way back to the car, we walked by the original Sloppy Joe’s Bar (that is now Captain Tony’s Saloon) which is where Ernest Hemingway spent much of his time during his most productive years. (We stopped in Jimmy Buffet’s Margaritaville to get something to drink, but no one would wait on us, so we left.) 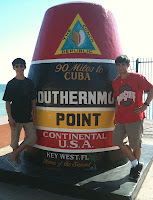 Like most people, we did all the normal things tourists do on their first trip to Key West: we took pictures at the 0-mile marker and the southernmost point in the continental United States (while trying to see Cuba which is just 90 miles away.) As a teenager, it is hard to admit when your parents are right, but the trip was truly a memorable experience.  The moral of the story is that sometimes you just have to take a spontaneous trip to Key West. We only spent one day on the island, but we saw a lot and had fun.

We were recently reminiscing about our trip and I decided to try to make a mango tango. Little did I know that it was not a regular item on the Hard Rock menu nor that it was a secret recipe. After extensive research and experimentation, I came up with a recipe that if it isn't exact, it is extremely close! 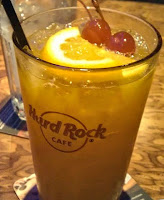 Mix the mango puree and orange juice together and pour over ice. Add the Red Bull stirring gently so you don’t deflate the carbonation. Drink and imagine clear blue water and ocean breezes!