Technique of the Week: Coring

Coring is a process that removes the core or center of various fruits, such as apples, pears and pineapple; and vegetables, such as lettuce and cabbage. Coring removes small seeds or tough and fibrous centers from the food items.  While it is not dangerous to eat the core, it is unappetizing.

There are a variety of tools available to remove the core from apples and pears. Only a sharp knife is needed to core an apple in the easiest way. Just slice the apple into four quarters, and use the knife to cut out the core. Just a small V-shaped nick around the central core is all it takes. If the core runs through the slice from stem to bottom, put the slice on end or on its side and use a paring knife to cut the entire core out. Sectioning tools which both core and section the fruit at the same time are also very popular. We prefer an apple corer which slides down through the center of the fruit removing the entire core but leaving the rest of the fruit completely intact. Apples cored in this way are perfect for baking. 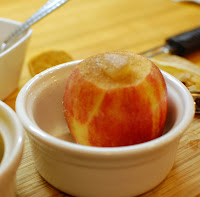 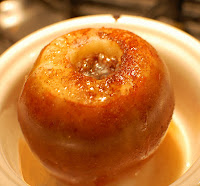 Core apples with an apple corer or by scooping out the center of each apple with a melon baller. Make sure not to puncture the bottom of the apples so that the juices will remain inside while baking; discard cores. Remove skin from ½” around top of apples at the opening.

Fill each cavity with the cinnamon-sugar mixture and top each apple with a teaspoon of butter. Place apples in casserole dish and pour apple juice or water around them to cover bottoms of apples by about ½ inch. Cover pan with aluminum foil and bake until apples are soft but not mushy; approximately 45 minutes to 1 hour. Remove from heat and serve warm, ice cream optional.